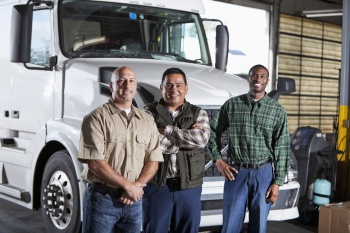 The ongoing recovery of the U.S. oil and housing industries is fueling a shortage of truck drivers, according to industry analysts.

Lee Klaskow, an industry analyst for Bloomberg Industries, says trucking firms may need to open their wallets to attract and retain drivers. “If you really want to find people to fill the seat, you’ve got to make the industry much more attractive to the 21-year-old who doesn’t know what he wants to do with this life,” said Klaskow.

Adding to the driver shortage are new federal rules that went into effect in July that limit drivers to 70 hours of driving per week, down from 82 hours. On top of that, new rest requirements limit how much they can drive in the small hours of the morning, when roads are relatively empty.

When the economy was cratering, truck fleets at transportation giants FedEx, UPS and Swift Transportation reported a surplus of 85,000 drivers. Today these companies are about 211,000 bodies short, according to estimates by FTR Associates, an Indiana-based freight logistics firm.

One example of the national shortage is being played out in Cedar Rapids, Iowa where CRST Expedited is based.

“The customers need our equipment. They are calling and asking for us to haul freight. If I don’t find individuals to work and move those loads around we’re not going to be able to haul the freight the customers need us to haul,” said Holzer.

The U.S. Department of Labor reports that trucking is one of the fastest growing industries in the country. As the economy continues to rebound, so does the demand for goods and more truck drivers are needed to move those goods.

Kirkwood Community College in Cedar Rapids is trying to help fill the void for truck drivers but is finding the trucker lifestyle a hard sell.

“You know what, I’m not going to lie. I fell for the stereotype myself,” said Karl Harlow, a Kirkwood trucking student.

Harlow left Florida to train at Kirkwood and said his misconceptions disappeared once he actually got to know drivers.

While schools fight stereotypes to bolster driver numbers, businesses are using incentives. CRST Expedited officials plan to increase their overall driver pay by $10 million over the next year.

“We need to start competing with the other opportunities out there,” said Holzer. “The driver shortage is real. It is something that is throughout the entire industry. This is our attempt to remedy the driver shortage at CRST.”

“While the driver shortage is generally confined to only certain segments of the trucking industry, it is having real impacts in how fleets recruit and retain their drivers,” he said.

“Fleets in all segments of trucking have told us they are having a more difficult time finding qualified drivers than they were a year ago,” Costello said. “As a result, more fleets are considering hiring drivers straight out of driver training programs and nearly three-quarters of those we surveyed plan to increase pay or have already done so.”

The industry needs to add an average 96,000 drivers annually to keep up with demand. If freight demand continues to grow as projected, the driver shortage could reach 240,000 by 2022, according to ATA figures.

The U.S. Energy Information Administration says oil delivered to refineries shot up 38 percent between 2011 and 2012.

But while the need for truckers is growing, the ranks of well-trained drivers are shrinking as baby boomers hit retirement age.

“The driver pool is aging, and there are not enough young drivers coming out of truck-driving school to replace those drivers, at the same time that the demand for freight is increasing,” said Brian Fielkow, president of Jetco Delivery, a Houston-based trucking company.