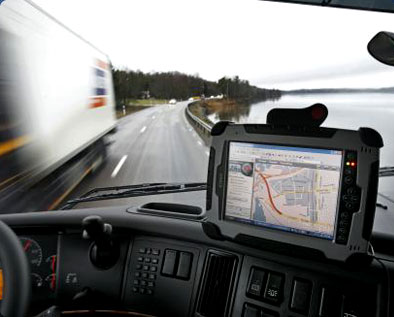 Truckers, once drawn to the job for the freedom of the open road, are rapidly becoming the most monitored employees in the American workforce.

New regulations for Electronic On-board Recorders (EOBR) are expected next year and many truckers don’t like the prospect of even closer scrutiny on the hours they drive and how much down time they get while on the job.

To meet new federal standards, truckers will have to track when a truck’s engine is running, record its duty status and ensure that drivers aren’t working for more than 14 consecutive hours, including a maximum of 11 actual driving hours within that window.

As with most new technology, there are already those figuring out ways to beat the system.

“Truckers are a particularly savvy and motivated bunch,” said Karen Levy, a Princeton PhD candidate who has been researching the impact of EOBRs in the trucking industry. “Some drivers have figured out how to temporarily disconnect certain EOBR models from the truck, or to otherwise block their signals so they can’t record data. Another approach is to drive using multiple driver ID numbers which are sometimes called ‘ghost logs.’”

The coming EOBR standards are being designed to make the “Hours of Service” log-keeping, which drivers are already required to do manually, more accurate. It’s also an attempt to reduce crashes. A 2006 government survey suggested that around 13 percent of accidents are fatigue-related.

Within the trucking community the EOBRs are sometimes seen as intrusion. The Owner Operator Independent Drivers Association (OOIDA) won a 2011 lawsuit against the Federal Motor Carrier Safety Administration (FMCSA), successfully delaying implementation of the rule.

OOIDA complained that there was a risk of driver harassment, in which carriers, cognizant that a trucker is running out of time to complete his delivery, might goad him or her into getting back on the road when it’s not safe to do so. Fatigue, inclement weather, or traffic problems could all be ignored for the sake of the time sheet.

“These are the kinds of decisions that experienced, professional drivers have to make every day,” said Todd Spencer, executive vice president of OOIDA. “These are safety decisions. Technology can’t take the place of sound judgment,” he added.

The trucking community expects the new rules to be in place by 2015.

Though there are pockets of resistance, the industry as a whole is embracing the EOBR concept. Many of the bigger carriers have made a vigorous effort to adapt early and absorb the cost of implementing EOBRs across their fleet as soon as possible.

Thomas Scollard, vice president of dedicated contract carriage services for Penske Logistics says the devices have improved planning and cut back on paperwork.

“We’re fortunate that, the size we are, we can look at something like this, put some resources against it and say, OK, how do we make this work for us in a positive way?” said Scollard.

But it’s not just the major carriers who are embracing EOBRs. Cliff Downing, an independent operator in Iowa, has accepted the new technology.

“My gross revenues have been up year over year each year since using electronic logs,” he said. “Now is it due to electronic logs? Not the machine itself, it’s the efficiency that’s been forced onto us by the machine.”

Downing said people who complain about the EOBR mandate are simply expressing an innate but unhelpful resistance to change. After all, in Europe, simpler electronic tachographs have been mandatory since the 1970s. And for him, the digital recorder has been a boon. “If I need a log for an officer alongside the road, it’s kind of like… how do ya want it? Do you want me to fax it to you? Here, I can show you on my smartphone! Oh hey, I can open up my Macbook Air, you can look at it on my laptop,” he said.

Downing’s adoption of the EOBR reflects a practical approach to changes in the industry. “I modified my operation to make it work,” he says. “As much as the libertarian in me says no to mandates, they’re coming. You might as well just wake up, face it, and deal with it.”

On the legal front, OOIDA says it is not currently planning any further legal challenges against the FMCSA, whose rule-making is nearly complete.