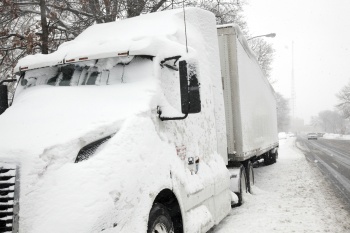 Recent heavy winter storms across the nation have underscored the need for all drivers, including truckers, to take extra precautions when traveling during the winter months.

The truck drivers’ tips on how to safely navigate through winter conditions include the following:

Winter Storm Dion, the fourth named winter storm of the 2013-14 season by the National Weather Service, produced snow in Washington, California, Nevada, Texas and parts of the Midwest earlier this month before heading east to hit the Great Lakes and Mid-Atlantic regions.

Another storm hit the Midwest and East Coast last week and several storms are predicted in the Central, Eastern and Northwestern states into the week of Christmas.

“With severe weather affecting much of the country, we are balancing our priorities of employee safety and customer service,” noted rival United Parcel Service. “Our team is monitoring the situation and has contingency plans in place to minimize service disruptions.”

December storms have closed the federal government for non-emergency workers and major airports across the country have faced thousands of flight cancellations and delays.