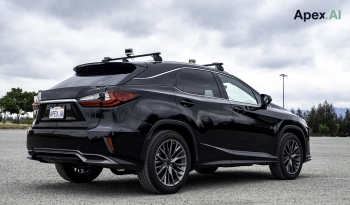 PALO ALTO, CA – Tech startup Apex.AI, which develops software for vehicles and smart machines, has captured the attention of some of the automotive world’s giants.

Earlier this month, Apex.AI announced that Daimler Truck, one of the world’s leading commercial vehicle manufacturers, made a strategic minority investment in the company.

Apex.AI has developed an industry-leading suite of automotive safety-certified software solutions, including the Apex.OS operating system. The software suite serves as the foundational infrastructure on which smart machines and autonomous vehicles operate in the automotive, agriculture, mining, IoT and industrial automation industries.

“This strategic investment from Daimler Truck demonstrates its forward-thinking nature by ensuring that our scalable applications continue to drive software defined vehicle development for the entire industry,” said Jan Becker, Co-founder, and CEO, Apex.AI. “Our powerful solutions are purposely designed with simplicity in mind. That is the approach that is changing the way companies in a wide range of industries develop their future vehicle technologies.”

The Apex.OS Software Development Kit (SDK) enables automotive software developers to create safe, reliable, real-time applications more efficiently. Like Apple’s iOS SDK, which allows anyone to create an iPhone app, Apex.OS makes programming for a vehicle or robot as easy as programming a phone. The result is significantly shortened development cycles of new mobility functions, all of which are created on a bedrock of software that is recognized for having the highest safety standards.

Apex.AI’s flagship Apex.OS operating system is an operating system that has earned the highest safety certifications in the industry, including product certification from German testing organization TÜV Nord and the highest level of automotive software safety ISO 26262 ASIL-D. Passing these rigorous testing programs means that the software system is approved for serial production.

The company launched its award-winning first product Apex.OS after three years in 2020 and took it through the certification process for a 2021 launch.

Apex.AI won a CES 2021 Honoree-Innovation Award for the operating system in the Vehicle Intelligence & Transportation category.

Behind the award is an elite jury of automotive and new technology experts, media representatives, designers, and engineers. They examine the submitted products based on innovative strength, technology, functionality, aesthetics, and design.

The investments in companies like Apex.AI by industry giants indicates a growing role for autonomous trucking.

TuSimple, another tech startup, is gaining traction in the autonomous space. CEO Xiaodi Hou wants to be an evangelist for the autonomous trucking industry, according to a report on CNBC.

The company reported that it achieved fully autonomous freight delivery late last year. TuSimple calls the autonomous operation of a semi-truck without a person on board or controlling it remotely “Driver Out.”

“We have conquered some major problems and we have reached this milestone. This is a new chapter. People do not really understand the technology,” said Hou, who previously served as chief technology officer.

“The other role of me being the CEO is really being the evangelist and telling the truth to the world about the hard problems of autonomy and also the realities that we’re facing.”

He added: “Many people, even the people who are in the industry, they’re trying to oversimplify some of the very complicated challenges.”

TuSimple moves freight autonomously for some of the biggest names in freight including UPS, which has a minority stake in the startup, and rail operator Union Pacific. The company is also developing fully autonomous semi-trucks with Navistar that are scheduled to come off the assembly line by the end of 2024, but that timeline could change.

“We basically have presented to the world a complete system with a lot of safety and redundancy on it.” Hou said, “So we are focusing on reducing the operating cost per mile so that in the end, we can compete with a human driver on the per mile basis. That is the second phase.”