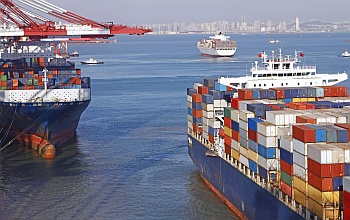 With many states looking to increase global exports, the challenge of moving those goods to port remains a real one.

In Idaho, for example, wheat, vegetables and dairy products were among the top agricultural exports in 2012, according to the Idaho State Department of Agriculture. The products were destined for Canada, Mexico, China and Japan.

But Idaho’s access to export internationally relies on the ability to find truck drivers to haul the goods to transfer points in Seattle, Portland and Oakland, according to Jan Roeser, a regional economist at the Idaho Department of Labor.

“We can’t even get enough trucks,” said Bill Newbry, the chief executive officer of the Pacific Northwest Farmers Cooperative, which represents more than 750 farmers in the Washington and Idaho. “We could utilize 12 to 15 a day, and we’re lucky to get three or four. It’s very, very difficult to get the commodity out on time.”

The northern Idaho town of Lewiston offers a river port, but the distance to the Pacific Ocean and its location make it difficult for central and southern Idaho businesses to access it.

The container decline “has been a function of the Great Recession,” said David Doeringsfeld, the manager of the Port of Lewiston. “We’re not trying to become a West Coast port. What we’re doing is providing for the region the least-cost method for local businesses.”

“We don’t have as many goods as others might, so we don’t get preferential treatment by the railroads,” Roeser said. “We have smaller amounts, smaller goods, and it just doesn’t pay for them to stop and pick up what we have.”

The nationwide demand for truck drivers will grow by 21 percent from 2010 to 2020, faster than the national average for all occupations, the Bureau of Labor Statistics projects.

“Trucks go anywhere or just about anywhere,” said Bob Costello, the chief economist at the American Trucking Associations. “As the economy continues to improve, we see demands for truck drivers increasing. If you go to truck driver training school and don’t have a criminal record or poor driving record, you’re going to get hired.”

To recruit more drivers to transport goods to transfer points, driving schools and trucking companies have been partnering up, according to Julie Pipal, president and CEO of the Idaho Trucking Association. One of those is Handy Truck Line, which has about 100 employees and four locations in Idaho. The company reached out to job centers to attract more drivers, said Clay Handy, the company’s CEO.

“The core problem is that for most people, it’s not an attractive job,” he said. “They want to be home more often.” The solution, Handy said, was to ask single truck drivers without families to take overnight shifts, while those with families work day shifts.

“You can tell how good the economy is by the demand for transportation,” said Newbry, of the farmers’ cooperative. “If you can’t find enough trucks to haul your product, they’re somewhere else hauling.”