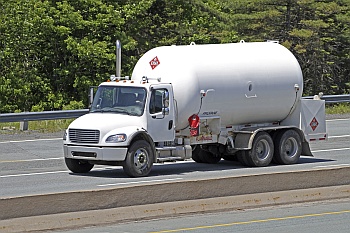 Extreme arctic cold weather in the Midwest and Eastern regions of the country this winter has caused shortages of propane, affecting the 14 million Americans who use propane to heat their homes.

According to the National Propane Gas Association, the propane shortage crisis was caused by a number of events, including a 2013 rise in U.S. propane exports, increased agricultural demand during the crop drying season, rail rerouting that stalled Canadian imports, and repairs on the Canadian Cochin pipeline that passes through the United States en route from Alberta to Ontario.

In response to the crisis, the U.S. DOT issued emergency orders exempting transporters in 37 states from national Hours of Service (HOS) rules that limit how many hours a driver can be on the road. In addition to the federal emergency orders, governors in many states have also issued state of emergency declarations to ease transportation regulations and increase propane deliveries.

The exemptions, FMCSA says, allow drivers “providing direct assistance supporting the delivery of propane and home heating fuels” to those states, and the exemption immediately expires when a driver or carrier uses the vehicle “in interstate commerce to transport cargo or provide services not directly supporting the emergency relief effort,” according to the declarations.

Propane users face not only losing heat in the coming weeks, but will have to pay dearly for propane they do receive. Across the country, prices for the fuel have risen dramatically; as increased demand paired with strained delivery lines have led to a fuel shortage.

National propane stocks have plummeted 45 percent from January 2013, according to the U.S. Energy Information Administration (EIA), and the average national retail price per gallon has shot to a record $4.01, an increase of 75 percent over the same time period. Prices for heating oil also hit a record high this week of $4.18 a gallon.

“This has kind of caught us all off guard,” said Eric Burmeister, director of emergency management in Marinette County, Wisconsin. Burmeister said he has fielded a number of calls from people with nearly empty fuel tanks, many of them senior citizens living on fixed incomes who can’t afford to pay for fuel.

“To say to a family that has already put out $2,000 for fuel that they need to come up with another $1,000, it’s just not there,” Burmeister said. “That’s the biggest issue we are seeing right now.”

In Georgia, Governor Nathan Deal signed an executive order prohibiting propane providers from price gouging. Due to the state’s unusually cold weather this winter, Georgia has seen a higher demand for propane gas that has resulted in shortages and escalating prices.

In Wisconsin, Governor Scott Walker released $8.5 million to help low-income residents pay for propane and is pushing a $5 million loan guarantee program to spur banks to expand credit to propane dealers. Minnesota Governor Mark Dayton has instructed his commerce commissioner to help guard consumers from price gouging. In North Dakota, payments to propane vendors made as part of the state’s Low Income Home Energy Assistance Program have increased almost 8 percent from a year ago, according to Heather Steffl, a spokeswoman for the program.

“The industry as a whole should have been prepared for this,” said Missouri state Sen. Mike Parson. Parson is urging the U.S. Justice Department to investigate rising prices in his state. “We should be able to figure out what our supply and demand is.”