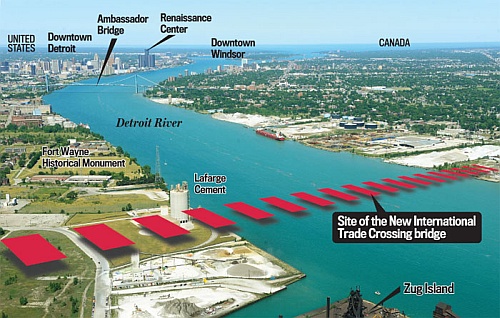 A new International Trade Crossing (ITC) bridge connecting Ontario to Michigan could be delayed if the U.S. government does not come up with funding for a new U.S. customs facility.

The Canadian government is prepared to spend $2.1 billion for the new crossing but a $325 million customs facility on the U.S. side of the border may slow the project.

The new crossing is designed to relieve congestion on the Ambassador Bridge in Windsor. The project team has received all environmental clearances and permits and is now waiting on the U.S. Congress.

“Until you get clarity or confirmation of the U.S. government’s intentions, there is concern,” said Roy Norton, Canada’s consul-general in Detroit.

Canadian officials are hopeful that funding for the U.S. customs facility will be included in the next federal budget.

Norton said unless U.S. funding is secured in the next few months, Ottawa couldn’t move forward to finalize a public-private partnership. Both public and private investment in the project will be repaid through bridge tolls.

A spokeswoman for Transport Canada said the government remains confident the U.S. government will ultimately fund its share of the project and “meet its obligations in the bi-national partnership to build a new crossing at one of North America’s most important gateways.”

Canada plans to begin buying land in Detroit’s Delray district for the new ITC even without assurances the U.S. will pay for a needed customs plaza, according to Canadian officials.

Canada has targeted the project for a 2020 completion. As many as 1,000 residents in Detroit’s Delray neighborhood have been waiting years to learn if their properties will be acquired for the project.

“People have been on the tether here for how many years? It seems like nearly a decade,” said Tom Cervenak, director of the nonprofit People’s Community Services of Metropolitan Detroit branch office in Delray.

The new bridge would span the Detroit River from southwest Detroit to Windsor, about two miles downstream from the existing Ambassador Bridge.

Norton said Canada would move forward on land acquisition without a firm commitment from its U.S. neighbors.

“We’re about to proceed with land purchases some time in the next few months, and we’re going to do that whether there’s been an indication from the U.S. government on a commitment to the customs plaza or not,” Norton said. “That involves a little bit of risk on our part, obviously, but we’re so confident that this ultimately will be built that it’s prudent to do that.”

Michigan Gov. Rick Snyder, a strong supporter of the project, said U.S. officials were stalling on committing to pay for the plaza. The most recent estimates indicate the customs plaza will require a 160-acre footprint to accommodate traffic lanes, inspection areas and interchanges connecting to I-75.

If land purchases begin this year, as Norton predicted, officials hope to have a majority of the parcels acquired by the end of 2015. Condemnation proceedings on parcels where owners resist selling may stretch into 2016, but that wouldn’t necessarily delay construction work since Michigan eminent domain laws allow the government to acquire parcels up front and negotiate settlements after the fact.

The Windsor-Detroit corridor is Canada’s most important trade artery and the busiest commercial land border crossing in North America.  There are short-term and long-term benefits to the project.

In the short-term, the bridge project will create hundreds of thousands of jobs on both sides of the border and support economic growth during the current global economic downturn.

In the long-term, building a new bridge is necessary as the existing Windsor-Detroit crossing is reaching capacity.  Both governments recognize that the region needs sufficient and competitive crossing infrastructure to facilitate trade over the next 30 years and beyond.

Based on expert analysis, truck traffic in the Windsor-Detroit corridor is expected to triple and vehicle traffic is expected to double over the next 30 years.  Moreover, the results of an investment-grade traffic study contracted by the State of Michigan and detailing traffic projections for the next 10 years confirms the need for additional border crossing capacity between Windsor and Detroit.