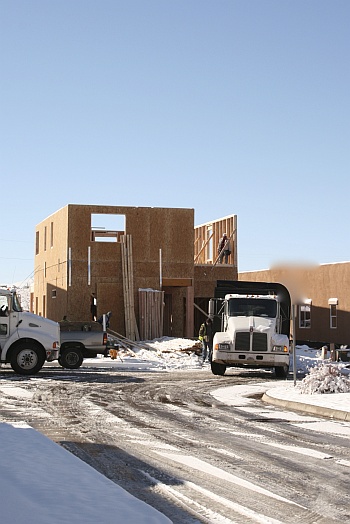 Still clawing its way of out of a recessionary period, the U.S. economy continues to make a slow climb back to health.

Payrolls increased by 113,000 jobs in January, better than a December gain of 75,000, but less than November’s increase of 274,000 and the average of more than 200,000 per month from August through November. The January gain was far less than many economists were expecting.

Of the jobs added in January, 3,200 were in trucking, while the wider transportation and warehousing sector, which includes trucking, added 10,000 jobs. The number of trucking jobs includes those only in the for-hire sector, omitting ones in businesses such as construction or with private fleets.

“A weak start to the year with back-to-back disappointing employment reports in December and January suggesting momentum in the labor market has waned,” says Lindsey Piegza, chief economist at the investment firm Sterne Agee. “While weather may have slowed consumer foot traffic at points during the month or impeded manufacturing capacity in parts of the country, goods production hiring improved at the start of the year making it difficult to blame weather for the headline weakness.”

Privately held U.S. trucking companies posted their fourth year of higher sales, and profitability also improved in 2013, according to data from Sageworks, a financial information company.

A financial statement analysis shows that private companies in the general-freight trucking industry, on average, increased sales by about 7 percent. Industry sales growth slowed from 2012, although not quite as much as sales slowed among private companies of all types. database.

Sageworks analyst Peter Brown said the trucking industry is a good indicator of the U.S. economy because it shows what’s going on domestically with shipments, as opposed to other forms of freight transport that are more heavily influenced by international shipments.

“What’s also true about the trucking industry is that it seems to parallel other measures of economic activity like manufacturing and consumer spending, which have risen in the last year as well,” Brown said.

Brown said it’s unclear whether volume, pricing, or a combination of the two was behind private trucking companies’ 2013 sales increases. Other industry groups, however, have reported truckers generally have been hauling heavier loads, even if rates and the number of shipments haven’t improved materially.

Private trucking companies historically have thin profit margins relative to other industries. But profitability improved in 2013, according to preliminary estimates. Net profit margin, on average, was about 6 percent, compared with average margins in the 3 percent to 4 percent range the previous three years.

FTR said it “assumes that the Federal Motor Carrier Safety Administration (FMCSA) will delay “most of the next round” of expected regulatory changes.

“We have also seen several positive indicators being reported in the industry during December and January that are making us slightly more bullish about the direction in the market as we enter 2014,” said Jonathan Starks, FTR’s director of transportation analysis.

Online sales in 2014 are project to grow even more, between 9 and 12 percent.

“Measured improvements in economic growth combined with positive expectations for continued consumer spending will put the retail industry in a relatively good place in 2014,” said NRF President and CEO Matthew Shay. “Though headwinds in the form of the looming debt ceiling debates, increased health care costs, and regulatory concerns still pose risks for both consumers and retailers, we are cautiously optimistic and hopeful that the economic tides will change in 2014.”

The group also predicts economic growth is expected to be above its long-term historical average. “Early estimates for growth in the economy as measured by real GDP could fall between 2.6 and 3 percent, a noticeable improvement from the estimated 1.9 percent rate for 2013 and the fastest pace in the past three years,” says NRF.