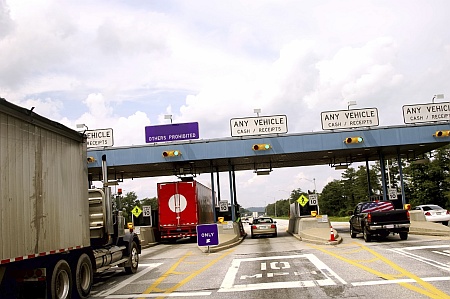 With the U.S. Highway Trust Fund heading toward insolvency, Congress and the trucking industry are lining up on opposite sides of a battle over tolls on American interstate highways.

ATFI says it wants to show both the public and members of government the effects implementing tolls on interstates would have on business and the economy, as well as consumers.

“All we’re asking for is giving the states the flexibility, if they want to take on that challenge, to see if they can sell it,” said Jim Tymon, director of program finance and management for the American Association of State Highway and Transportation Officials (AASHTO).

The pending insolvency of the federal Highway Trust Fund is creating urgency on the issue.

AASHTO President Mike Hancock, who is also secretary of the Kentucky Transportation Cabinet, says a crisis in transportation funding is at the doorstep.

“We could face serious economic disruptions as early as this summer if USDOT delays reimbursements to the states for projects already completed,” Hancock said. “Unless Congress acts to either increase Highway Trust Fund revenues or provide additional General Fund support, the states will be unable to obligate virtually any new federal funds starting in Fiscal Year 2015.”

USDOT Secretary Anthony Foxx announced in January that the Highway Trust Fund’s Highway Account is likely to run out of money in August. To prevent insolvency, FHWA may slow down reimbursement to states from a daily basis and instead begin reimbursing once a week, or even once a month. This happened in September 2008 when the Highway Account experienced its first cash shortfall and FHWA began reimbursing states on a weekly basis.

Delays in reimbursement from FHWA may prevent states from being able to pay contractors in a timely manner. Contractors – who rely on prompt payments from states – may be unable to pay their workers, subcontractors and suppliers.

“For some construction businesses and suppliers, which survived the recession but are still operating on the slimmest of margins this could simply be the last straw,” said Hancock.

ATFI fears the bare federal cupboards will spur Congress to remove the restrictions on tolling interstates.

“The Interstate system is vital to the U.S. supply chain and has revolutionized the way America does business,” said Perron. “Tolling existing Interstates would reverse this progress, raising costs for travelers, businesses and consumers and harming the many businesses and communities located along interstate routes subject to new tolls.”

Mega-carrier Old Dominion representative Bill Cranfill said while his company supports better highway funding, tolls aren’t the route to take.  “Tolls are an inefficient method of funding, would increase the cost of moving goods, and would decrease efficiency by pushing interstate traffic onto less safe and slower local roads,” he said. “The concept of unrestricted movement is a pillar of the modern economy,” he added.

Congress banned tolls on interstate highways when it created the national road network under President Eisenhower in 1956. Only stretches of highway that already had tolls — such as those in Illinois — could keep them. The federal government also allows tolls on new highways and on lanes added to existing interstates, as long as the revenue is used for repair and maintenance of the tolled road.

Congress loosened the restrictions slightly in 1998, creating a pilot program that allowed three states to impose new tolls. Missouri, North Carolina and Virginia won those slots by applying to the federal government, but none of those states has followed through. In fact, Virginia legislators ruled out tolls on Interstate 95 as part of a sweeping transportation package they passed last year.