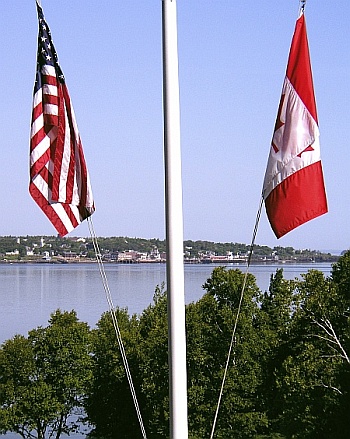 The U.S. and Canada recently launched a pilot program that allows American customs officers to inspect U.S.-bound cargo trucks still in Canada; a move both countries hope will smooth the flow of goods at the borders.

The pilot, launched in late February at the Peace Bridge linking Buffalo, New York and Fort Erie, Ontario, is designed to reduce wait times and cut down on pollution causing idling on the 86 year-old span.

The bridge handled 1.2 million truck trips and more than $40 billion in trade last year, making it the third-busiest truck crossing on the U.S.-Canada border. The three-lane span also saw more than 4.7 million passenger cars, more than any other port of entry.

With the U.S. side of the bridge lacking space to increase capacity, lawmakers have for several years wanted to shift some inspections to Canada. But a host of jurisdictional obstacles, including objections to armed U.S. officers working in Canada, prevented the solution now being tested.

The test program is the second phase of a pilot called for in the Beyond the Border Action Plan signed by Prime Minister Stephen Harper and President Obama in December 2011.

Phase 1 got underway in June at the Pacific Highway Crossing in British Columbia to test the feasibility of certain technology and procedures. The second phase will test the effect on wait times and border congestion.

Blaney said the program will enhance the movement of people and goods across the Canada-U.S. border.

“I’m very happy that Phase II is taking place in Fort Erie, where cross-border travel and trade is essential,” he said.

“The reaction of most people was to throw up their hands and say let’s forget about it, and we persisted,” said Sen. Charles Schumer, D-N.Y., “We just had to keep showing people how important this was to our mutual economy. That’s the bottom line here.”

Under the voluntary program, trucks equipped with transponders are inspected in Canada. Once in the U.S., the pre-inspected vehicles are directed to an enforcement booth where drivers see either a green light, signaling they’ve been cleared, or a red light requiring them to stop for a secondary inspection. Under the system, which keeps enforcement on the U.S. side, drivers do not know until they get to the light whether they have been flagged.

Rep. Brian Higgins, D-N.Y., said relieving congestion on the bridge also would improve air quality in the nearby Buffalo neighborhood, where high rates of childhood asthma have been documented.

Truck drivers said they hope that taking the time to stop before crossing the bridge will pay off on the other side, but they noted the program does not address the need for more capacity on the aging span, and worry the traffic backups will persist.

“We want it to work, but it’s important that this is a pilot,” said David Bradley, president of the Canadian Trucking Alliance. “Really what you’re talking about, one could argue, is two stops where there’s currently one. We have to make sure it works, that the guard at the other side is moving the traffic quickly enough so that it flows through.”

“The United States and Canada have long enjoyed a strong binational partnership further bolstered by the Beyond the Border agreement,” said Rep. Higgins. “Pre-inspection saw success during phase I and holds great promise of facilitating a more efficient flow of goods, delivering environmental benefits and reducing congestion for all crossing the bridge. A more predictable border serves to grow the already deeply connected economies of Western New York and Southern Ontario supporting jobs and businesses on both sides of the bridge.”

“Today is a banner day for Western New York, its commuters, restaurants, businesses, sports teams, residents and more,” said Sen. Schumer. “It’s been a long road getting the Peace Bridge chosen as one of only two pilot sites in the country for pre-clearance of commercial truck traffic on the Canadian side, but I am confident it will prove worth the wait. Starting today, the pilot program will make history in Western New York, and if it’s successful, could lead to its permanence and the relocation of all truck inspections to Ontario.”