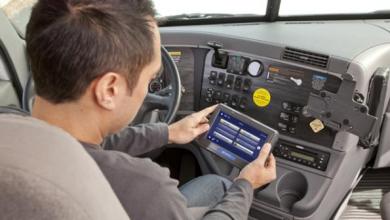 According to FMCSA, the proposed rulemaking would significantly reduce the paperwork burden associated with hours-of-service recordkeeping for interstate truck and bus drivers – the largest in the federal government following tax-related filings – and improve the quality of logbook data.

“Today’s proposal will improve safety while helping businesses by cutting unnecessary paperwork – exactly the type of government streamlining President Obama called for in his State of the Union address,” said Transportation Secretary Anthony Foxx. “By leveraging innovative technology with Electronic Logging Devices, we have the opportunity to save lives and boost efficiency for both motor carriers and safety inspectors.”

The proposed rule will ultimately reduce hours-of-service violations by making it more difficult for drivers to misrepresent their time on logbooks and avoid detection by FMCSA and law enforcement personnel. Analysis shows it will also help reduce crashes by fatigued drivers and prevent approximately 20 fatalities and 434 injuries each year for an annual safety benefit of $394.8 million.

“By implementing Electronic Logging Devices, we will advance our mission to increase safety and prevent fatigued drivers from getting behind the wheel,” said FMCSA Administrator Anne S. Ferro. “With broad support from safety advocates, carriers and members of Congress, we are committed to achieving this important step in the commercial bus and truck industries.”

Most large trucking companies already use such devices, said Jackie Gillen, president of Advocates for Highway and Auto Safety. The devices are required in Europe, as well nearly a dozen other countries.

But they have been opposed by small trucking companies and drivers who own their rigs, she said. Drivers call paper logbooks “comic books” because they’re so easy to fake, she said.

“This is really going to cut down on the cheating and make it safer,” Gillen said of the electronic devices. “Right now, drivers are under tremendous pressure with ‘just in time delivery’ and unreasonable demands by shippers to get loads to their destinations that they are forced to cheat and drive as far and as fast as they can.”

The Owner-Operator Independent Drivers Association said it was reviewing the proposal.

Electronic recorders “are used to harass and coerce truck drivers into continuing to drive regardless of driving conditions, such as bad weather, congested traffic or simply if the driver is too tired to drive,” said OOIDA Vice President Todd Spencer. “Plus, there is no known device that is capable of automatically recording a driver’s duty status throughout a work day, not just when they are driving, and this is also a requirement from Congress.”

But the American Trucking Associations welcomed the proposal “as a way to improve safety and compliance in the trucking industry and to level the playing field” for trucking fleets that have “already voluntarily moved to this technology,” said ATA President and CEO Bill Graves.

In developing the updated proposal, FMCSA relied on input from its Motor Carrier Safety Advisory Committee, feedback from two public listening sessions and comments filed during an extended period following the 2011 proposed rule. The proposal also incorporates the mandates included in the most recent transportation bill, the Moving Ahead for Progress in the 21st Century (MAP-21) Act, and other statutes.

Impaired driving, including fatigue, was listed as a factor in more than 12 percent of the 129,120 total crashes that involved large trucks or buses in 2012.