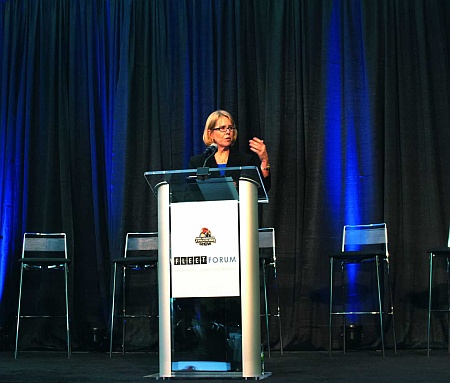 FMCSA wanted to hear from truckers about knowledge testing for new transportation companies but also got an earful about FMCSA’s new electronic logging device (ELD) rules.

Owner-operators generally supported testing as a way to improve highway safety, and brokers were opposed to testing.

Ferro headed a five-member delegation from her agency that sought public comment on how to write a rule that Congress ordered created.

New companies seeking a Department of Transportation number to operate as motor carriers, freight brokers or forwarders must be tested to see if they understand federal regulations on those industries.

The proficiency exam has been on the agency’s to-do list for several years, but Congress expedited the process when it included the requirement in last year’s highway bill.

“It has been standard practice if you needed a DOT number you could get as many as you wanted whenever you wanted. It has been too easy,” said Ferro.

David Owen of the National Association of Small Trucking Companies said the idea is long overdue. His group, he said, started offering members new-entrant survival training about five years ago and has sent about 1,000 people through the course.

Owen suggested using the existing CDL licensing infrastructure for the new-entrant exams.  He threw out a $100 possible fee for applicants, and recommended FMCSA offer an online tutorial to help prepare people for the test.

Tom Weakley with the OOIDA Foundation agreed that new entrants should be tested on FMCSA regulations, as well as knowing how CSA works and what happens when there is an intervention.

“They should know how to establish a safety management plan,” Weakley said. “We don’t think it should be limited to FMCSA regulations. There are some best practices that need to be considered, including budgeting, knowing their costs of operation, etc.”

On a different matter, FMCSA said it remains confident that there will be an adequate number of certified medical examiners as of May 21, when U.S. government certification supplants individual state approaches to truck drivers’ physical exams.

Pamela Perry, nurse consult in the Office of Carrier, Driver and Vehicle Safety, said that 11,000 medical examiners have been certified, with 26,000 in the process of obtaining certification after training and testing.

While confident that there will be enough examiners certified to do the physicals for the nation’s three million commercial vehicle license holders, she also said the agency was concerned about the number of certified examiners who will be in rural areas, where many truck drivers live.

FMCSA said that the industry will eventually need about 40,000 certified examiners to cover both urban and rural areas in the U.S.

During the early stages of the rulemaking process, it was pointed out that a shortage of examiners could mean that many drivers would have to drive hundreds of miles out of their way to complete their certification. Fewer examiners could also lead to longer wait times for drivers and no opportunities for walk-ins.

FMCSA expects the number of registered examiners to grow, noting that many people tend to wait until the last minute to take the test.

The National Registry requires drivers to receive medical certification from medical professionals who are part of the registry. Official examiners will be trained on FMCSA’s regulations and the physical standards of the truck driving industry. In the past, any licensed professional could certify a driver for physical qualification.

FMCSA is implementing the standardized approach after abuses of the process on the state level, including one examiner who certified a driver whose health problems led to a bus crash that killed 22 people. That same examiner, Perry said, reported the same blood pressure for everyone.

“We need that national regulation to be able to control that kind of thing,” Perry said.

Drivers whose card expires after May 21 must have exams done by someone in the registry, she said, stressing that drivers who have a valid medical card do not have to get an examination until the card expires.

Perry added that there are no changes in the health qualifications.

She also said that FMCSA has no idea how many people do the exams on a state level. Perry was asked about a possible extension of the date while more examiners are certified and said that decision would have to come from Ferro.