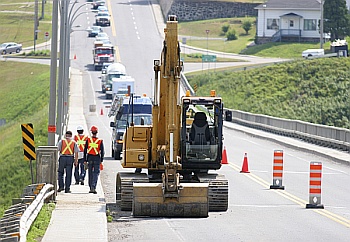 If the nation’s Highway Trust Fund goes belly up this summer most states and dozens of metropolitan areas will lose the majority of highway dollars needed to maintain and upgrade the transportation network, according to a report recently released by Transportation for America (T4A), a Washington, D.C.-based alliance of elected, business and civic leaders from across the country.

The report, The End of the Road? The Looming Fiscal Disaster for Transportation,shows the dollar amounts that each state and metro area will be forced to forego if Congress does not act to avert the insolvency of the transportation fund, expected to be exhausted in July. The shortfall is a result of lower than expected collections of revenue from a gas tax that has not changed since 1993, despite rapidly rising construction costs.

Unless Congress adds new revenue to the trust fund, the federal government will be unable to commit to funding any new transportation projects.

“America is at a crucial decision point for transportation,” said James Corless, director of Transportation for America.  “But there is a ray of light: The crisis presents an opportunity, because it comes at the same time as Congress must update the federal transportation program, MAP-21. We believe we have a chance to resuscitate and reinvigorate the program in exciting ways, so that it better suits the needs of people in the communities where they live.”

T4A’s report comes on the heels of a report issued by the American Transportation Research Institute (ATRI) that says congestion on U.S. interstate highways added more than $9.2 billion in operational costs to the trucking industry in 2013 alone.

They found delays made up more than 141 million hours of lost productivity – or about 51,000 truck drivers sitting idle for an entire working year.

The worst places for operational expenses caused by congestion were California, with more than $1.7 billion in costs, Texas with more than $1 billion, the Los Angeles metropolitan area with $1.1 billion and New York City with $984 million.

Congestion was most severe in urban areas, with 89 percent of the congestion costs concentrated on only 12 percent of interstate mileage.

T4A said absent a new transportation bill, the outlook is bleak. Starting this fall, every dollar of gas tax revenue collected will be needed to cover the federal share of projects already promised to states, regions, and transit agencies, according to the Congressional Budget Office.

While each state raises its own funds through some sort of taxing mechanism and local governments contribute their own funds, federal funds account for the lion’s share of almost any major project in the country, from a key bridge replacement or highway rehab to new rail cars and buses. Federal dollars account for half or more of the capital transportation budget in all but 15 states, and for many the share is two-thirds or more.

Metro areas such as Miami, Seattle, Atlanta, Denver, Dallas, Philadelphia and Minneapolis-St. Paul could be out $100 million or more.

“Over the last nine months we have met with local leaders in regions all over the country, and they all tell us the same thing: They believe their constituents would be willing to pay more for transportation, if they know those dollars will come back to benefit their communities,” Corless said.

Robert Poole, director of transportation policy at the Reason Foundation, does not expect Congress to approve a four-year transportation-funding bill; he sees another two-year bill as more likely.

“There’s certainly not much to be optimistic about, but I don’t think it’s the end of the world,” he said. “A lot of state legislators are biting the bullet and deciding they need to do more self-help and not rely on Washington so much.”

Poole said he was “very encouraged” by one component of the Obama administration’s transportation proposal: a first-ever offer to allow states to use tolling to rebuild their interstates. “That would be huge,” he said.