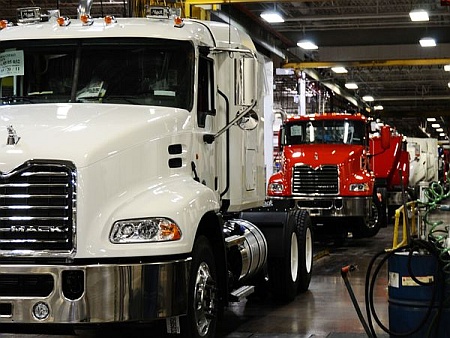 In a trend that signals a continued economic recovery, U.S. trucking companies are ordering big rigs at an eight-year high, boosting trucking stocks and raising pay for drivers who are in short supply.

Trucks move roughly 70 percent of all freight tonnage in the U.S. — everything from consumable goods and housing materials to business equipment and chemicals.

“Trucking at its core is a classic case of supply and demand,” said Deutsche Bank analyst Robert Salmon.

The growth is largely due to a “strong recovery” in manufacturing, growing exports and inventory buildups.

But it has been a long, bumpy road from the start of the downturn. Truckers began to see business tail off in the second half of 2006 as the housing market soured. Things went downhill from there, with many top fleets seeing earnings and revenue slow or decline over the next three to four years.

Freight volumes rebounded in late 2012 as the economy improved. But demand growth hasn’t tracked higher on a steady curve.

But freight volume grew more than the economy did. Demand improved again later in 2013 as the overall economy picked up, but it took a hit when fierce winter storms slowed shoppers and truck traffic.

“It’s been a fit-and-start recovery,” said Eric Starks, FTR’s president. “Some parts of the economy were heating up and other parts slowing down. Everybody was not in lock step.”

With a particularly harsh winter now gone, the trucking recovery seems on a smoother course.

“We’ve seen a significant rebound in overall trucking freight volumes,” Salmon said. “After the weather started to clear, there was a lot of pent-up demand for movement of freight by retailers and manufacturers.”

Rising cargo rates are giving truckers confidence to expand fleets and replace tractors averaging a near-record age of 9.6 years. While first-quarter U.S. economic growth came to a near standstill, gross domestic product is expected to expand 2.5 percent this year, according to the median forecast of 94 economists surveyed by Bloomberg, topping 2013’s 1.9 percent rise, and accelerate to a 3.1 percent rate next year.

“We’ve been waiting for a year like this to come back for a few years,” said Cutler. “This appears to be the year it’s coming back.” Eaton raised its 2014 forecast for North American truck output by 5.7 percent to 280,000 units. That was among the highest annual totals projected by seven truck and equipment manufacturers, based on data compiled by Bloomberg. Their average prediction is for an 11 percent gain over 2013.

Old Dominion, based in Thomasville, North Carolina, added $25 million to its budget to buy additional tractors and trailers, raising its planned 2014 equipment investment to $188 million “as a result of our strong volume for the first quarter and our expectation for the remainder of the year,” said CEO David Congdon.

More trucks are on the way for Knight, too, as the Phoenix-based carrier adds 200 tractors, according to CEO Kevin Knight.

Suppliers are benefiting as well. Cummins Inc., which produces engines for Class 8 trucks, forecast 2014 sales growth of as much as 10 percent, while analysts surveyed by Bloomberg project a revenue gain of 12 percent for Paccar Inc., the maker of Kenworth and Peterbilt trucks.

The Standard & Poor’s Supercomposite Trucking Indexrose 8.9 percent this year, almost five times as much as the broader S&P 1500 Supercomposite Index of U.S. stocks. The gauge of 11 truckers beat the broader index in three of the previous four years.

The optimism defies U.S. growth that slowed to a crawl last quarter, with gross domestic product expanding at an annualized rate of just 0.1 percent. Downward revisions for gauges such as inventories and construction spending also suggested deceleration in the world’s largest economy.