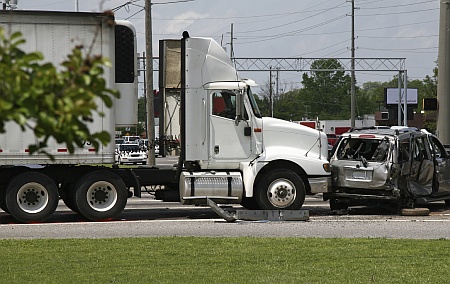 In April, the Federal Motor Carrier Safety Administration (FMCSA) submitted its’ required quadrennial report to Congress on the appropriateness of the current minimum financial responsibility requirements for motor carriers, brokers and freight forwarders.

FMCSA concluded that current minimum financial responsibility limits for the commercial motor vehicle industry — including the $750,000 limit for general freight carriers— are inadequate to meet the costs of some crashes, mainly because of rising medical costs.

The agency stopped short of recommending specific new limits but could have a proposal by the end of June and new limits could be published in November.

The current required minimum liability limits were established in the 1980s, stemming from the Motor Carrier Act of 1980 and the Bus Regulatory Reform Act of 1982. By 1985, after a phase-in period, limits for motor carriers of property (freight) were set at:

For motor carriers of passengers, minimum limits were set at:

The Volpe study examined whether the minimum financial responsibility requirements under 49 USC sections 31138-31139 should be raised, weighing the benefits of improved compensation for crash victims, internalization of freight and passenger transportation costs, and reductions in truck and bus-involved crashes, against costs imposed on CMV operators, the insurance industry, and other relevant considerations. Overall, the study’s findings provided preliminary support for increasing the current levels of financial responsibility.

The FMCSA study found that catastrophic motor carrier crashes resulting in injury, death and/or damages that exceed the current limits are relatively rare — less than one percent of 330,000 crashes analyzed. However, while catastrophic crashes are rare, the costs for the resulting severe injuries can exceed $1 million and current insurance limits do not adequately cover these costs, according to the report.

Truckers are split on the issue, with some accepting higher limits and others opposing them as unnecessary and a burden on smaller trucking firms. Insurers aren’t saying anything, yet anyway, while insurance brokers, noting that many truckers already buy more than the minimum limits, agree that current minimum limits are too low.

One group, the Trucking Alliance, a group of seven carriers that lobby for safety legislation on Capitol Hill, conducted its own study and found that the dollar settlements in some cases were far above the $750,000 minimum federal insurance requirement.

Spencer cited the small number of carriers in the survey and said he believes the current requirement is adequate. “Most truckers have a minimum of $1 million (in coverage) and in the overwhelming majority of instances that’s plenty,” he said.

“We have never seen a correlation between insurance minimums and safety,” Spencer added. “What increased minimums would do is result in tremendous increases in the number of personal injury lawyers that specialize in suing trucking companies.”

“ATA read the press release from these carriers, and the 3.5 page ‘study’ performed by an actuarial firm,” said Sean McNally, vice president of communications for ATA.

“FMCSA has consistently found over the same time period examined by the Trucking Alliance that the average cost of a crash involving a large truck is less than a third of the minimum limit required today,” he said.

McNally said ATA is still developing its position on the insurance requirements.

“As part of that process we are looking for all available data, including FMCSA’s upcoming study of the topic. Whenever we ultimately adopt a position, it will be data driven,” he added.

“We all know how inflation has reduced what we can get with a dollar. And nowhere is this more true than in healthcare, where the cost of hospitalization and medical treatment has skyrocketed in recent decades,” said Mike Stephenson, an Indiana personal injury attorney who represents victims of car and truck accidents. “To have financial responsibility limits the same in 2014 as they were in 1985 is hardly responsible and I’m glad the FMCSA has recognized this and will correcting it through future rulemaking,” he added.

Key highlights from the FMCSA study include the following:

FMCSA’s study acknowledged industry research on the subject and made the following observations:

FMCSA has formed a rulemaking team to further evaluate the appropriate level of financial responsibility for the motor carrier industry and has placed this rulemaking among the agency’s high priority rules. FMCSA will continue to meet with the stakeholders, including impacted industries, safety advocacy groups, and private citizens, as it moves forward with developing a proposed rule, according to the report.