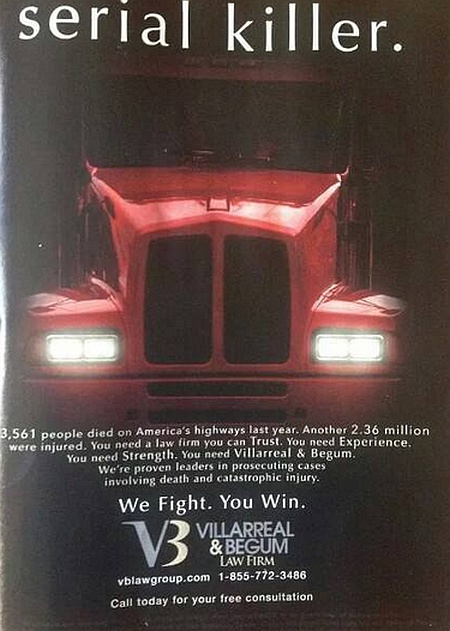 An advertisement in the June issue of Maxim magazine for a Texas law firm has created a firestorm in the trucking industry.

The ad, titled “Serial Killer,” shows a red trucking rig and includes the copy, “3,561 people died on America’s highways last year. Another 2.36 million were injured. You need a law firm you can trust. You need experience. You need strength.”

Placed by the Texas law firm Villarreal & Begum, the ad evoked a strong response from the industry, including the pulling of the magazine from the shelves of Travel Centers of America/Petros and Pilot Flying J travel centers.

Maxim magazine was quick to acknowledge that running the ad was a mistake.

“In the June 2014 issue of Maxim a legal firm ran an advertisement about truckers that was offensive. The ad in Maxim does not reflect the beliefs or opinions of the people at this magazine, which recently has begun operating under new ownership. New procedures are being implemented so that no such negative advertisements or editorial content will ever run in Maxim magazine. Maxim is aware of and appreciates the wide readership of truckers. Maxim is taking aggressive action to remove the aforesaid advertisement. To illustrate, the ad has been removed from its digital copy and is being replaced with facts about truckers and the trucking industry. Maxim will find many avenues to continue supporting the industry. A new day now flourishes at Maxim, and we will show steadfast support for the very industry that carries our magazine to newsstands and readers around the world,” read a company statement.

“Please be assured that it was never the intent of the Villarreal & Begum Law Firm to disparage the hard working Americans that drive tractor-trailers for a living. Our intent was to reach out to those individuals who have been involved in catastrophic accidents as a result of irresponsible drivers. The ad was in-artfully created and we could see how it may have caused our message to be misconstrued. We recognize the service that truck drivers provide to this nation and acknowledge that most truck drivers are safe and responsible drivers. There are, however, few drivers that do not always live up to the standards promulgated by state and federal agencies and end up hurting innocent people who, in turn, deserve adequate representation. It is the victims of catastrophic trucking accidents that we intended to reach and not our intent to offend law-abiding citizens that drive tractor-trailers for a living. We apologize that the wording of our ad has offended you and your family. In response to your and others’ objections, we have instructed our marketing department not to use that ad in the future,” the firm wrote in a statement.

“TCA is proud of the immediate action from truck stop retailers who pulled from their shelves the current issue of Maxim magazine, which features an ad depicting the trucking industry as ‘serial killers.’ One in 16 Americans work in jobs within or related to the trucking industry. The editors and staff of Maxim need to know that we are their family members, their neighbors, and their friends. When we are on the road, we look out for them as we would our own children. And we will not let this mischaracterization go unanswered. The ad strikes an emotional chord for the trucking industry. We encourage everyone to take a moment to collect their thoughts and craft a well-reasoned message to Maxim about why this ad was wrong and how the magazine can make things right for the hardworking men and women in our industry,” wrote Debbie Sparks, vice president of the Truckload Carriers Association.

“It defames an occupation in the millions that perform a critical service to the nation and is one of the most offensive injury attorney advertisements we’ve ever seen. We can only imagine what ads like this would look like if minimum insurance requirements are raised,” wrote Norita Taylor, spokeswoman for the Owner Operator Independent Drivers Association.

“Dear Editors: As a representative of the more than 7 million professionals in the trucking industry, we are horrified that your magazine would publish an advertisement that depicts the professional truck driver as a serial killer (advertisement by V3 Villarreal & Begum Law Firm).

The advertisement, and the fact you would choose to publish it, is absolutely appalling and outrageous. We are asking for Maxim magazine to issue an apology to our vital industry and afford us complimentary space in your next issue to run a truthful advertisement about the industry that safely serves America 24/7,” wrote the American Trucking Associations.