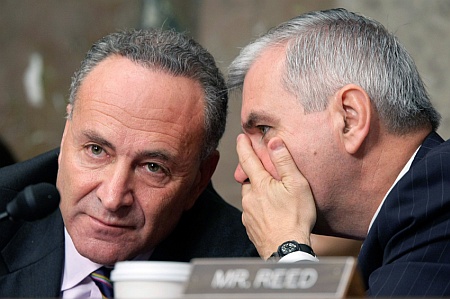 ELDs track how many hours a trucker has driven as well as rest periods, replacing the standard paper logs.

The truck driver in the June crash, Kevin Roper, had been awake for more than 24 hours at the time of the crash, according to the criminal complaint.

“There’s no way to check right now if those records are falsified,” said Schumer. “We’d do away with the drivers filling in the records, because the GPS wouldn’t lie.”

FMCSA said it is working toward a solution.

“The uniform adoption of ELDs for commercial truck and bus drivers is one of DOT’s top priorities, and we are committed to completing the rulemaking process as expeditiously as possible,” the agency said.

Pending legislation in Congress would have a new ELD rule in place early next year.

If passed, the Transportation and Urban Housing Development (THUD) bill would require FMCSA to publish the final electronic logging device rule by Jan. 30, 2015. The proposed version of the rule was published nearly six months behind the deadline of Sept. 30, 2013, set by the current highway-funding bill.

In response to requests from industry interests, FMCSA extended the public comment period for the rule by 30 days to June 26, 2014. The January deadline would give the administration seven full months to write up the final version of the bill.

Many trucks are already using an ELD. Some drivers, including Felix Espinosa of Massachusetts, like the device.

“I think it’s a good thing because it will keep us out of trouble with the Department of Transportation,” Espinosa said.

But other drivers hate the ELD. Terry Brown, of Florida, said having “Big Brother” in the cab forces him to take breaks when he’s wide-awake, or risk a penalty.

“My customer is five miles away,” Brown said.” I can’t leave here until my ten-hour break is up. I can’t move the truck. The ELD will automatically trip your hours.”

Under federal law, truck drivers are permitted to drive 70 hours per week. They are permitted 14-hour workdays, with only 11 hours spent driving. They must take a 30-minute break during the 11 hours.

As lawmakers and safety advocates seize on the Tracy Morgan crash as a way to raise awareness on truck safety, the Owner-Operator Independent Drivers Association (OOIDA) is trying to change the subject. In a June 13 statement, the association argued that a regulation to establish minimum behind-the-wheel training standards for new truck drivers would be far more effective than other measures FMCSA is pursuing.

“Instead of relying on technology and making misguided, hours-of-service regulations changes, the focus should instead be on training standards for entry-level drivers,” said Todd Spencer, OOIDA’s executive vice president.

Although the headline for OOIDA’s news release was the need for driver-training standards, most of the release discusses the HOS restart change and fatigue in general. OOIDA said it receives many complaints from drivers that the HOS restart changes have had the unintended consequence of forcing drivers to spend more time on the road and less time at home.

OOIDA also charged that trucking’s critics are misrepresenting the data.

“Statistically, fatigue almost never is the cause of truck-related crashes and yet the data is grossly exaggerated to 30 or more percent,” Spencer said.

Citing data in an October 2013 FMCSA report on truck crash data. OOIDA notes that fatigue is recorded as a factor in only 1.8 percent of truck crashes. Larger figures quoted often include data for passenger vehicle drivers, who are responsible for most crashes involving both trucks and passenger vehicles, according to OOIDA.