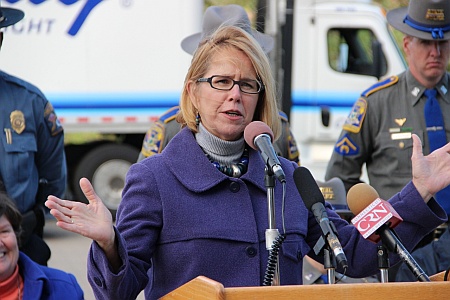 The American Trucking Associations (ATA) said the industry is “justified in having serious concerns” about Ferro’s tenure at FMCSA but stopped short of calling for her resignation.

Ferro is at odds with the trucking associations over her position on the Hours-of-Service (HOS) rules that went into effect last year. Several members of Congress are pushing for legislation that would suspend the HOS rules until additional studies are completed.

“We have asked the secretary to put into place new leadership at FMCSA,” said Jim Johnston, the president and CEO of OOIDA. “The agency needs to be headed by someone who will approach professional truck drivers with the respect and fair treatment that their important work and commitment to safety demand.”

Johnston added that Ferro has a “clear bias against truckers and the trucking industry.”

Ferro appeared before a Senate panel on June 3 and and was questioned about elements of FMCSA’s hours-of-service rule enacted last July. Ferro said the rules were working, and that the implementation of electronic logging devices “will improve and mitigate the impact of fatigue-related driving and fatigue-related crashes.”

She also published a blog post June 3 that argued “suspending the current hours-of-service safety rules will expose families and drivers to greater risk every time they’re on the road.”

Not all drivers, however, think removing Ferro from her position is a good idea.

The letter said Ferro “gets it,” because she sees the relationship between non-compliance and sub-standard pay.

In the letter, the drivers, several of whom are Citizen Driver Award winners, wrote: “We believe Administrator Ferro truly understands the trucker’s plight, demonstrated by her testifying before Congress regarding fair compensation for drivers. She then proposed that Congress pass legislation requiring truck drivers be brought under the Fair Labor Standards Act, like most other American employees.”

Also, the letter said, Ferro “ … understands, and we strongly agree, that there is a correlation between compliance and safety. She also understands that the inequitable compensation standard is the fundamental issue that stands in the way of achieving the level of compliance required for a safer trucking industry, not only for other motorists but also for other professional drivers.”

They wrote that Ferro’s mission has been to raise the bar of safety for both drivers and carriers and eliminate the “race to the bottom mentality” that cuts corners on safety.

“Among our group of professionals, we are certain this is the time to support Administrator Ferro and the FMCSA,” the letter concluded.

In his June 5 letter to Foxx, OOIDA’s Johnston said the following: “Recent comments by Administrator Anne Ferro, combined with actions by the Federal Motor Carrier Safety Administration (FMCSA), have made it clear to most truckers on the road and OOIDA’s Board of Directors that they can no longer be assured of respect from and fair treatment by the Administrator and the agency she leads. These statements and actions, which I will outline below, demonstrate a clear bias against truckers and the trucking industry. On behalf of the OOIDA’s Board of Directors I am writing to express our disappointment in Administrator Anne Ferro’s failed leadership of the FMCSA. I respectfully request that you take immediate action to remedy this situation.”

Secretary Foxx defended FMCSA’s rules, saying that they help save an estimated 19 lives each year.

“DOT and our FMCSA conducted unprecedented levels of research, including public input and the largest real-world study of its kind in developing a rule that protects everyone on the road,” he said.

President Obama appointed Ferro to her position in 2009. Ferro also led the Maryland Motor Truck Association as its president and CEO from 2003 to 2009 and served as Maryland’s motor vehicle administrator from 1997 to 2003.