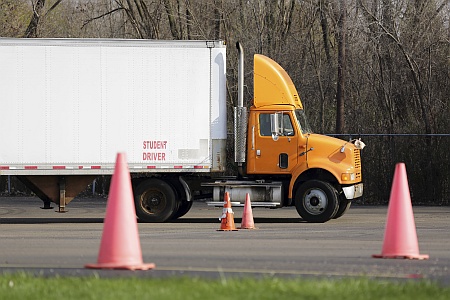 With much of the national focus on Hours of Service and Electronic Logging Device (ELD) rules, the Owner-Operator Independent Drivers Association (OOIDA) is pushing the federal government to establish minimum, behind-the-wheel training standards for new truck drivers – something that does not exist today.

“Instead of relying on technology and making misguided, hours-of-service regulations changes, the focus should instead be on training standards for entry-level drivers,” said OOIDA executive vice-president Todd Spencer.

“Despite orders from Congress in 1991, the Federal Motor Carrier Safety Administration has still not made training new drivers a priority.”

Spencer noted changes to the U.S. hours-of-service rules implemented last year have caused many drivers to spend more time on the road and less at home. He also noted fatigue is rarely the cause of truck-involved crashes.

“Statistically, fatigue almost never is the cause of truck-related crashes and yet the data is grossly exaggerated to 30 or more per cent,” said Spencer.

He cited FMCSA statistics that indicate fatigue is a factor in just 1.8 percent of truck crashes.

“Truckers are not causing the majority of highway crashes, but are unfairly blamed,” said Spencer. “Most are doing their best to drive safely as hard-working individuals and should be recognized for the sacrifices they make and the contribution they make to the economy.”

While OOIDA is calling for behind-the-wheel training standards, recent changes to federal trucking regulations allow states to waive the commercial driver’s license driving test for as long as a year for veterans with comparable military-driving experience.

Previously, the driving skills test could only be waived for 90 days after leaving military service, the Virginia DMV said.

The change significantly increases the number of Virginia veterans eligible to participate in Virginia’s Troops to Trucks program, according to Virginia’s DMV.

More than 300 military personnel or veterans have already taken part in Virginia’s Troops to Trucks program. The program helps military personnel about to leave service and new veterans obtain commercial driver’s licenses and assists with their civilian job searches.

The extension could allow an additional 60 to 100 veterans to participate in Troops to Trucks annually, the state agency said.

“This rule change positively affects potential participants in Virginia’s Troops to Trucks program, allowing veterans a more reasonable amount of time in which to decide to pursue a CDL (commercial driver’s license) and a career in transportation,” said DMV Commissioner Richard D. Holcomb.

The U.S. Army’s Transportation School is based at Fort Lee in Prince George County. The Army does its driver training at Fort Lee and at Fort Leonard Wood in Missouri.

According to the American Trucking Association, the for-hire trucking industry is facing a shortage of drivers. The association said that the industry is struggling to find qualified drivers.

The shortage of roughly 25,000 drivers is due to a number of reasons, the trucking group said, including demographic shifts, regulatory effects and the fact that drivers can be away from home for relatively long periods of time.

About 225,000 people hold commercial driver’s licenses in Virginia, according to a DMV spokeswoman.

“Our first part of the program — we’re just calling it ‘one less test,'” Holcomb said. “If they have driven successfully and their commander is willing to certify that they’ve been a safe driver, and they’re within 90 days of being discharged, they can bring in that commander’s waiver and we only have them take the written test.”

The program is a “win-win situation” for both transitioning service members and the transportation industry, he added.