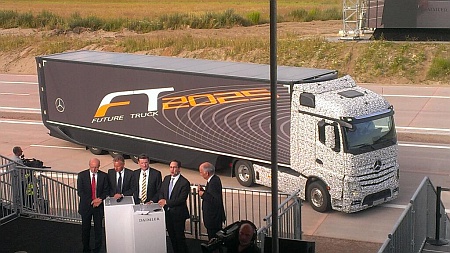 Earlier this month, on a stretch of the A14 autobahn in eastern Germany, Daimler demonstrated its Mercedes-Benz Future Truck 2025.

The truck, using autonomous technology, is capable of moving in traffic at speeds up to 52 miles per hour.

“The Future Truck 2025 leads to more efficiency, and better safety and connectivity,” said Dr. Wolfgang Bernhard, the head of Daimler Trucks. “This in turn results in a more sustainable transport system to the benefit of the economy, society and consumers.”

“Autonomous driving will revolutionize road freight transport and create major benefits for everyone involved. With the Future Truck 2025, Daimler Trucks is once again highlighting its pioneering role in innovative technologies and opening up a new era in truck transport,” he added.

Daimler has built only one prototype of the Future Truck 2025 and did not reveal how much the vehicle will cost once into production.

Analysts with IHS Automotive predict that adding self-driving technology to personal cars, which more manufacturers are exploring, would increase the cost of vehicles by about $10,000 by 2020.

During Daimler’s test, the large silver truck of the future fell into line with 20 other vehicles used to simulate realistic driving conditions. The truck responded to slowing cars in its lane by adjusting its speed accordingly and registered an approaching emergency vehicle in time to slide effortlessly into the far-right lane, allowing the emergency vehicle to pass on the left.

Unlike Google’s driverless autonomous vehicle, the Daimler future truck retains a steering wheel as a safety measure. This allows a driver to intervene for critical maneuvers, like overtaking a slower-moving vehicle in the left lane, much in the same way as the pilot of an airliner can intervene to guide an aircraft set on autopilot.

The Google car is focused on urban transport and specializes in traveling short distances on demand for individual passengers.

Volvo, the Swedish manufacturer, has been developing driverless vehicles as part of the European Union’s Safe Road Trains for the Environment program, which envisions creating a caravan of vehicles that follow a leader in an effort to reduce wind-drag and fuel costs. Only the vehicles following the leader, which is in the hands of a driver, are able to function autonomously.

Future Truck 2025 builds on technology Daimler has already used in its sedans. Last year, Daimler introduced he Mercedes-Benz 2014 S-Class, which retains a human behind a steering wheel but shares many of the same sensor systems and data communication platforms with the Future Truck, the company said.

With the Future Truck, he driver still needs to start the vehicle and enter the flow of traffic. But once the Future Truck reaches 50 mph, a prompt in the system asks the driver to activate what is called the Highway Pilot, which effectively takes over.

Equipped with sensors in the front that have ranges of 77 to 273 yards, and cameras capable of capturing images in more than one direction, the Future Truck can identify single- and double-lane roads, pedestrians and objects — moving or stationary — and respond to them.

Analysts say there remain hurdles for self-driving vehicles, like liability and cyber security issues, along with data quality and privacy.

“The deployment of autonomous vehicles today is less about technological capabilities and more about the ability of stakeholders to handle the various commercial and governance complexities associated with having such vehicles on the road,” said an Ernst and Young researcher.

At this point, the technology requires clear and consistent pavement markings that can be easily detected by the sensors. And laws requiring drivers to keep their eyes on the road would have to be changed. Regulations governing international truck travel and the use of data collected by the truck’s systems have to be adapted. Manufacturers will also have to ensure that their vehicles will be able to communicate with infrastructure and other vehicles across borders.

Rep. Tom Petri, (D-Wisconsin) Highways and Transit Subcommittee chairman, said advanced levels of vehicle autonomy would potentially be available to motorists in the next 10-20 years.

“The most advanced level of autonomous vehicle is capable of navigating roads with limited or no action from the driver by utilizing a variety of optical sensors, radar, and computer algorithms,” said Petri. “The sensors deliver environmental data of the road and surrounding vehicles into the computer algorithm which then determines the appropriate driving maneuver.”