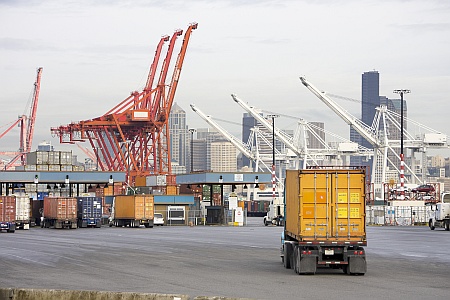 Port Metro Vancouver (British Columbia) has made a dramatic turnaround from a port that suffered such severe congestion that it triggered a trucker strike to a port that is now being held up as an example of how to keep things moving.

Four months later, a government-imposed system of penalties for terminals with excessive turnaround times and a program of extended gate hours instituted by terminal operators have solved the problem.

Turnaround times now average less than an hour and other port operators are taking notice.

“We’re all watching Vancouver,” said Bruce Wargo, president of PierPass Inc., the entity established by terminal operators in Los Angeles-Long Beach in 2005 to manage the program of night and weekend gates in the nation’s largest port complex.

Other port operators are studying Vancouver to see if a penalty system can be implemented that does not penalize terminals for events out of their control – such as late vessel arrivals, truckers with improper documentation or trucker requests to inspect empty containers.

Vancouver’s congestion earlier this year, for example, was triggered by severe winter weather in the eastern half of the continent, intermodal rail car shortages that caused containers to back up at the terminals and a costly strike by drayage truck drivers who were protesting wage conditions as well as long lines at marine terminals.

Los Angeles-Long Beach has other problems caused by mega-ships that generate from 5,000 to more than 8,000 container moves over a three-day call, and 35,000 truck moves per day, many of which involve a grueling trip on congested freeways. Chassis shortages also contribute to the congestion.

New York-New Jersey, meanwhile, contended this past year with a brutal winter, glitches in terminal operating systems and chassis shortages.

Vancouver prepared the way for a penalty system by equipping all of the trucks that are registered to work in the harbor with GPS devices to accurately record turn times. The program is tied to an appointment system, which gives terminal operators the ability to manage traffic flow and prepare their manning and equipment allocations each day.

The Vancouver system charges terminals a penalty of $50 if the transaction time exceeds 90 minutes. An additional $25 fee is added at two hours, another $25 at two and one-half hours, and an additional $20 for each half-hour after that.

The program in Vancouver was developed by the federal government in Canada, which sets minimum rates for owner-operator truck drivers, the provincial government of British Columbia, which enforces the system, and Port Metro Vancouver, which issues the licenses that trucking companies and drivers must have to work in the harbor.

“We’re fine with fees, but we want a stake in the game,” said Eric Waltz, president of TSI Terminals, the largest terminal operator in Vancouver. The terminal operators in Vancouver have paid more than $1 million in penalties for lengthy truck times since the program began in April. That includes absorbing penalties for trouble-ticket transactions, many of which are problems caused by truckers or cargo owners, and other issues outside of the control of the terminals.

“That model is not sustainable,” Waltz said. The port and government agencies are reviewing the requests by terminal operators for various exemptions, he noted.

In New Jersey, the demand for drivers has been exacerbated by chronic congestion at the ports in recent months, which has sparked long lines of trucks waiting for hours to get into a terminal, tying up resources needed elsewhere and driving some owner-operators to stop servicing them.

New Jersey, as well as Los Angeles-Long Beach, is but one of a number of ports in North America and Europe that have been in the news recently because of terminal congestion. The one common denominator faced by ports such as Rotterdam, Hamburg, Antwerp, and Vancouver, British Columbia is the continuous upsizing of vessels in the major east-west trade lanes.

The ships will only get bigger, according to Andrew Penfold, project director at Ocean Shipping Consultants. Penfold said the largest vessels now in service, with capacities of more than 18,000 20-foot container units, will be surpassed within four years by vessels of 22,000 to 24,000-TEU capacity.