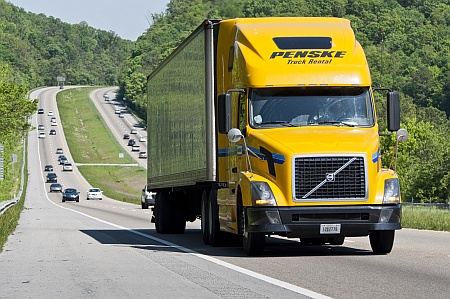 The joint venture will operate under the brand name Penske Truck Rental.

“We have an ambitious growth plan for our truck leasing and rental businesses,” said Brian Hard, President and CEO, Penske Truck Leasing, Co., L.P. “This new location will serve as a foundation for us to begin expanding and serving commercial truck fleet customers throughout Australia.”

The FS2 features a day cab while the FXC is equipped with a sleeper-cab. Both are powered by a 560 horsepower DD15 turbo diesel, coupled to Eaton’s UltraShift Plus transmission.

“To help ensure convenience and productivity all Penske rental trucks are equipped with toll transponders, GPS units, and have full fuel tanks on pick up,” said Beach.

Australia’s misery index – the sum of employment and inflation rates – is at 9.0, the highest since 2008 and the Great Depression.

Australia’s unemployment rate is at a 12-year high of 6.4 percent.

Prime Minister Tony Abbott’s government is cutting jobs and spending and raising taxes to tackle a budget deficit estimated to have swollen to $49.9 billion in June.

Despite the discouraging numbers, Australian businesses are showing a high level of confidence in the economy making a comeback.

Forty-six percent of businesses expect higher sales in the fourth quarter while only nine percent are predicting a fall, according to Dun and Bradstreet’s Business Expectations Survey.

The services sector was the most optimistic about sales in the fourth quarter of the year, followed by the transportation, utilities and construction sector. Retailers also expect a recovery from the recent slump in sales.

“The continued resilience in the outlook for employment suggests that the pace of job creation will move to a point where the unemployment rate edges lower over the next couple of quarters,” he said.

The report said that two out of three businesses are more optimistic about increased economic growth in the months ahead, but some parts of the country aren’t so upbeat.

In Western Australia, more than half of businesses described conditions as `average’.