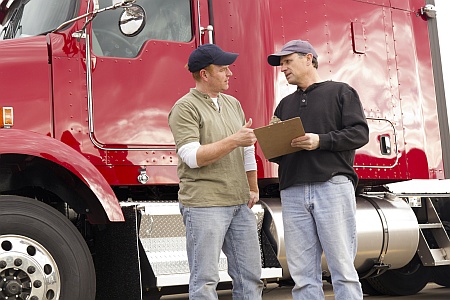 At least 33 truck drivers who filed wage claims against a Compton, California trucking company have been fired, according to the drivers.

The drivers allege the firings by Total Transportation Services Inc. (TTSI) were prompted by their participation in a series of strikes and wage claims filed with California’s Division of Labor Standards Enforcement (DLSE).

TTSI is disputing the claims, saying the company did not fire or terminate anyone.

Of the 33 drivers who say they were let go, at least 29 have pending DLSE claims totaling roughly $4.8 million in back pay and damages. The other four drivers were each awarded on average $68,211 in back pay after DLSE ruled the company misclassified employees as “independent contractors.”

Drivers said when they met with TTSI on Sept. 2, they were told at first that they did not have to drop their wage claims. Some were allowed to sign new lease agreements and returned to work. But not all drivers received the same deal.

“While we were waiting, the company changed their mind and told us that if we didn’t withdraw our DLSE claims we would not be allowed to sign the new contract,” Elmer Chacon, one of the drivers let go, said in a statement. “The drivers that did sign the new contracts and were back at work were sent a message on the QUALCOMM saying that they should return to TTSI and they are ‘out of service.’”

“Out of service” means that the truck drivers were no longer registered with TTSI’s dispatch service and therefore cannot work for the company.