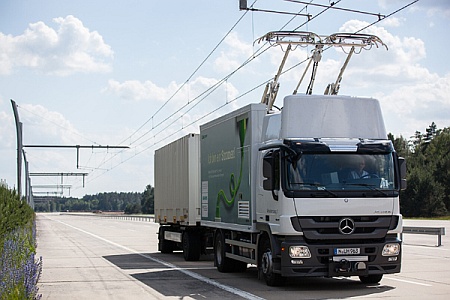 A pilot project to test electric-powered trucks at the ports of Los Angeles and Long Beach is slated to go live in 2015, according to the South Coast Air Quality Management District (SCAQMD), the agency tasked with air pollution control in the urban areas of Los Angeles, Riverside, San Bernadino and Orange counties.

The agency has selected a company to install an overhead catenary system on a one-mile test track that hearkens to the days of trolleys and street cars that once dominated urban America.

The two-way, one-mile mile system will be installed by Siemens and will be demonstrated with different battery-electric and hybrid trucks. The expected result is lower fossil fuel consumption, substantially reduced emissions, and lower operating costs, according Siemens.

Siemens and the Volvo Group, through its Mack Trucks, are developing a demonstration vehicle for the project. Siemens also is supplying current collectors, the technology that allows trucks to connect and disconnect from the catenary system at any speed, to local California truck integrators whose vehicles will also be part of the demonstration.

With the use of a current collector, the trucks can connect and disconnect from the catenary system at any speed for dynamic power supply directly to the electric engine and for on-board storage. To ensure the same flexibility as conventional trucks, the e-highway vehicles use an electric drive system, which can be powered either by diesel, compressed natural gas, battery or other on-board energy source, when driving outside of the catenary lines.

“As the first and second busiest container ports in the U.S., Long Beach and Los Angeles can benefit tremendously from the e-highway system, significantly reducing emissions from commercial trucks that normally contribute to much of the air pollution in this region,” said Matthias Schlelein, president of Siemens Mobility and Logistics division in the U.S.

According to Schlelein, the economic benefit of the e-highway system is compelling for cities like L.A., where many trucks travel a concentrated and relatively short distance, but pollution is high.

The catenary infrastructure will be installed on the northbound and southbound sections of Alameda Street, where it intersects with Sepulveda Boulevard in Carson. Up to four trucks will be running in the demonstration, making multiple drives per day.

The management district earlier commissioned a report by an independent consultancy that investigated how air quality can be improved, despite increases in drayage traffic between the ports and inland logistic hubs. It concluded that catenary hybrid vehicles “can simultaneously address emissions and fuel economy issues while providing operational flexibility at a similar or lower cost of ownership as other zero-emission technologies.”

The demonstration project serves the purpose of evaluating the technology, together with the truck manufacturing industry. It is the intention of this demonstration to generate a knowledge base for a potential future extension of the system to commercial applications locally and regionally, according to Siemens.

The project installation will begin immediately with infrastructure commissioned and first truck integrated in order to start the one-year demonstration in July 2015.

“When most people think of vehicle emissions, they assume cars do most of the damage, but it’s actually commercial trucks that are largely to blame,” says Daryl Dulaney, CEO, Siemens Infrastructure & Cities. “Freight transportation on U.S. roadways is expected to double by 2050, while global oil resources continue to deplete. And by 2030, carbon dioxide emissions are forecasted to jump 30 percent due to freight transport alone.”

Besides the benefits of reduced fossil fuel use and emissions, and reduced pollutant load in residential and agricultural areas, the system is easy to integrate into existing highways and infrastructures. Trucks will also be much quieter, according to Siemens.

The only downside is cost – Siemens estimates the system will cost $5-7 million per mile to build.