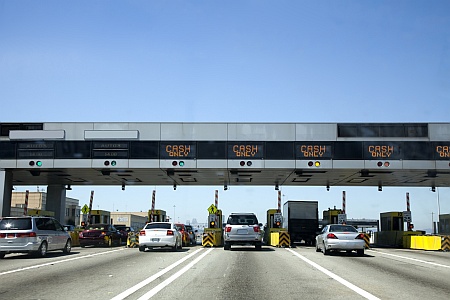 ITR Concession Company (ITR), the Spanish-Austrian consortium that paid the state of Indiana $3.8 billion in 2006 to lease the 157-mile toll road across northern Indiana between Ohio and Illinois, has declared bankruptcy.

ITR Concession Co. LLC filed for Chapter 11 protection in U.S. Bankruptcy Court in Chicago with a prepackaged plan backed by a majority of its creditors that proposes selling its assets or reorganizing its business to address a $6 billion debt.

Indiana Gov. Mike Pence said “Hoosiers can expect business as usual” on the 157-mile road, a main artery through the state. The bankruptcy isn’t expected to affect the operator’s 283 employees, the company said.

In a declaration filed with the bankruptcy court, Chief Executive Fernando Redondo said the company intends to pursue a sale of the toll road’s assets at a bankruptcy auction, with the proceeds earmarked for creditors. The sale process has a deadline of Aug. 1, 2015.

The 58-year-old road, which runs across Indiana between the Ohio Turnpike and Chicago Skyway, has struggled for years with a heavy debt load and lower-than-expected traffic.

ITR has since pumped $458 million into improving the toll road, Mr. Redondo said in a court filing, but a drop in interstate commerce following the global recession dampened revenue on the trucking-heavy route.

A number of other toll roads backed by private financing have struggled in recent years. American Roads LLC, which operates toll roads in Alabama and Michigan, restructured its debt through Chapter 11 last year.

In June, the Portuguese operator of the Northwest Parkway in Denver tapped restructuring advisers in the face of a high debt load. In 2011, San Diego’s South Bay Expressway, built by a company owned by a Macquarie-managed investment fund, exited bankruptcy protection under a plan that wiped hundreds of millions of dollars of debt from its balance sheet.

The implication for the public/private infrastructure market is unclear. Private investors are still interested in finding ways to invest in infrastructure as evidenced by the bids for projects like the Bayonne’s municipal water authority, Pennsylvania’s bridge replacement project and the Port of Miami’s freight tunnel.

A September report to the U.S. House Transportation and Infrastructure Committee found that public-partnerships can be part of the infrastructure funding dilemma but cannot be a panacea.

The House Panel on Public-Private Partnerships is urging transparency and accountability to the public whenever a PPP, also known as a P3, is being considered.

A public-private partnership is a financial agreement between government and the private sector involving a project or investment. For roadways and bridges, a PPP can involve construction, operation and/or maintenance by a private company in exchange for a cut of the finances. Many times, a PPP for a roadway or bridge involves tolls as the pay-for mechanism.

The House Transportation and Infrastructure Committee formed the PPP panel in January, asking for recommendations for balancing the need to generate more cash for infrastructure while protecting the public interest.

“Billions of dollars of infrastructure needs in the U.S. are in search of funding, and well-executed public-private partnerships can enhance the delivery and management of infrastructure,” said Duncan.

“P3s cannot provide the sole solution to all of the nation’s infrastructure needs, but they can offer significant benefits, particularly for high-cost, technically complex projects that otherwise may risk dying on the vine,” Duncan said.

OOIDA is against certain types of P3 projects but not all. The association is against the lease or sale of public roadways to the private sector and is against the conversion of federally funded highways and bridges into toll roads.

“We appreciate the panel doing an in-depth examination of all sides and all aspects of public-private partnerships in infrastructure,” OOIDA Director of Government Affairs Ryan Bowley said.

“We especially appreciate their strong bipartisan comments on the importance of transparency and ensuring that the public is made aware of information regarding details of potential PPPs before they are finalized.”