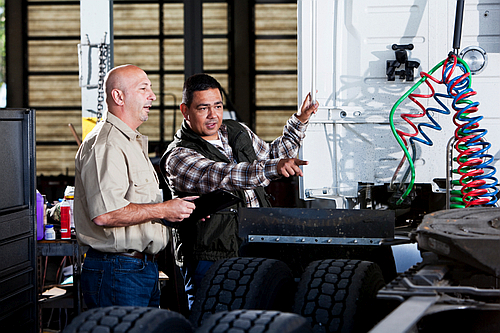 The much publicized truck driver shortage in the U.S. is real. The American Trucking Associations (ATA) estimates the shortage at 30,000 and growing.

But what is not in the spotlight is the growing shortage of technicians to maintain and service trucks that are getting more sophisticated by the day.

Major manufacturers are rolling out new technologies on a regular basis with everything from collision warning devices to driverless trucks at various stages of development.

Trucks are quickly morphing into rolling data centers and computer systems that track everything from fuel consumption to blind zone obstacles.

“The history of technology is such that when one door closes, another door opens,” said Fred Smith, founder, chairman and CEO of FedEx. “I have no doubt there will be more automated transportation equipment. It will be more evolutionary than revolutionary.”

Guy Warpness, president of WyoTech in Laramie, Wyoming says the future of heavy-duty truck technicians lies with the rising generation of workers.

“We are on the cusp of a major technician crisis in this country today,” said Warpness. “Women are an untapped resource that could help us meet that crisis head-on and eventually turn it around. But if this industry doesn’t start thinking and acting differently – and that includes recruiting women and bringing them into the workforce as technicians – things are going to get a lot worse before they get any better.”

For most fleets, today’s technician shortage is a source of major headaches, downtime and lost revenue. “If the current trends continue, we are fast approaching a day when American consumers could see food shortages in supermarkets because trucks aren’t able to get produce to market,” says Dwight McAlexander, who consults with Volvo on maintenance issues.

McAlexander describes the situation as “desperate” and one that “has been getting worse for several years now.” The trucking industry isn’t attracting enough new technicians to replace those that are retiring, he says.

“That’s not factoring in the fact that trucking is just not seen as an attractive career opportunity,” McAlexander says. ATA predicts a shortage of between 5,000 and 10,000 heavy-duty diesel technicians in the next five years. “This is a problem that is about to get exponentially worse,” he says.

Chuck Roberts, who heads the Automotive Youth Education System for the National Institute for Automotive Service Excellence, said it comes down to image and pay.

“Image has always been a problem for the automotive service industry in the broadest sense possible – that ‘grease monkey’ stereotype – and I don’t think that’s been helped by educational policy in this country,” Roberts says. “The high value placed on college prep paths hurts technology education.”

McAlexander said trucking is at a disadvantage when it comes to recruiting.

“Trucking is at a disadvantage when it comes to pulling from the pool of students who do want to work with their hands today,” he says. “We have to fight and compete for the same student who wants to work on computers or in aviation, automotive, marine, motorcycles or construction equipment, and frankly, trucking is the least attractive industry of that bunch.”

He said there is a misunderstanding about the earning potential of a heavy-duty diesel mechanic. Statistics posted by the U.S. Department of Labor, which are used by educational facilities to help students decide on career paths, currently show the median pay for heavy-duty truck technicians to be about $50,000 a year.

“We have got to work as an industry to change those stats,” McAlexander says. “If you go to a large truck dealer in a large market today, it is not unusual for a master technician at that dealership to be making more than $100,000 a year. As an industry, we’ve had a difficult time trying to get that data updated.”

Technical schools are restricted by the U.S. Department of Education from providing students with earning potential statistics outside of those approved by DOL, he says.

Ken Calhoun, vice president of customer relations for Truck Centers of Arkansas, a Freightliner dealer based in North Little Rock, said the pay structure for today’s technicians doesn’t get communicated to students.

“Nor does the fact that there are viable career paths for beyond turning wrenches forever,” says Calhoun. “I’m in management today, and I’ll bet if you took a poll at the next TMC meeting and asked everyone in a room making a six-figure income to raise their hand, you’d be amazed at the response,” he says. “Almost every one of the people with their hand in the air would tell you they started out as a diesel technician.”