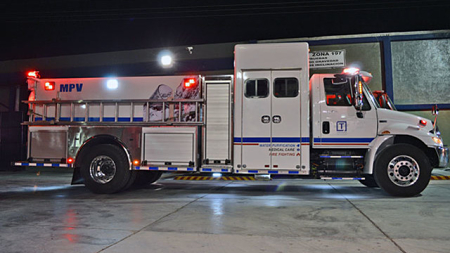 With both natural and man-made disasters breaking out somewhere on the globe on a regular basis, truck manufacturer Navistar, in partnership with Terranova GTS, recently unveiled its International DuraStar Multi-Purpose Vehicle (DuraStar MPV) – a truck designed to aid in disaster relief efforts.

“This state-of-the-art multi-purpose vehicle provides a critical resource to aid disaster relief efforts around the world,” said Tom Clevinger, Navistar senior vice president, Global Truck and Bus. “The first of its kind in the industry, this truck can serve as a life-saving tool and is equipped with a water purification system and firefighting capabilities and includes a mobile medical unit for emergency rescue and triage operations.”

Navistar says the DuraStar MPV is an ideal solution to cover an ample spectrum of relevant needs that includes water purification, fire and sanitary crises as well as mobile medical assistance. From unplanned, emergency situations to programmed activities such as water supply and medical campaigns, the versatility of the MPV allows for optimal asset utilization and maximized return on investment.

“We’re proud to have developed this versatile, multi-purpose vehicle and we’re excited about its potential impact to provide humanitarian aid and support for crises around the world,” Clevinger added.

Bernardo Valenzuela, president of Terranova, said the MPV represents years of development work and will be priced at around $250,000. He said the vehicle will help communities recover more quickly from natural disasters as well as improve their quality of life.

“I’ve traveled to many parts of Africa where there’s a need for not just medical care and firefighting services but even more for clean drinking water,” he explained. “That’s why we’ve combined those three pieces into one vehicle.”

Clevinger said the vehicle is built upon an International DuraStar medium-duty chassis powered by a MaxxForce diesel engine.

Valenzuela said non-governmental organizations involved in relief work as well as local municipalities are the initial focus points for selling the MPV, but that corporations should find this vehicle useful as well.

“For companies involved in mining or oil refineries in remote parts of the world, this vehicle can offer assistance to their work in times of crisis,” he said.

The water on the vehicle is stored in a 2,000 gallon polyurethane tank.

“Not only does that help make the vehicle lighter, it reduces the potential for corrosion and helps sustain the quality of the water stored on board,” added Valenzuela.

The number of natural disasters around the world has increased by more than four times in the last 20 years, according to a report released by the British charity Oxfam.

Oxfam analyzed data from the Red Cross, United Nations and researchers at Louvain University in Belgium. It found that the earth is currently experiencing approximately 500 natural disasters per year, compared with 120 per year in the early 1980s.

At the same time, the number of geologically related natural disasters has held steady. Oxfam has attributed the increasing disaster rate to global warming.

Between 1985 and 1994, Oxfam found that 174 million people were affected by disasters each year. In the following decade, this figure increased by 70 percent to 254 million people per year.

“With one month remaining in the 2014 Atlantic Hurricane Season, the United States is close to completing another year without a significant land falling hurricane event,” said Steve Bowen, associate director at Impact Forecasting. “However, insurers in Asia are coping with a series of cyclones that have led to considerable damage across the Western North Pacific and North Indian basins – most notably in India and Japan. The past two years of cyclone landfalls in Asia, including such storms as Fitow, Haiyan, Hudhud, Phalin, and Rammasun, have shown that tropical cyclones are becoming an increasingly costly peril for insurers with exposures outside of the US.”