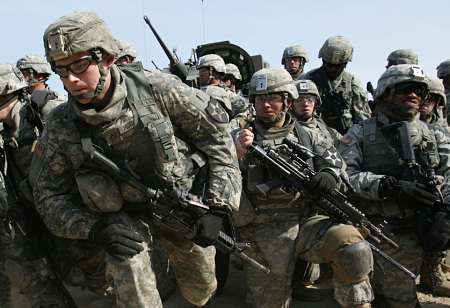 The American Trucking Associations (ATA), the nation’s largest trucking association, has pledged to hire 100,000 veterans over the next two years as part of the U.S. Chamber of Commerce Foundation’s Hiring 500,000 Heroes campaign.

“There’s no higher calling for an American than to serve in our armed forces, and I’d like to think that driving a truck, delivering America’s most essential goods safely and efficiently, is also a high calling,” said Bill Graves, president and CEO of ATA. “That’s why we’re so proud to be partnering with Hiring our Heroes and committing on behalf of the trucking industry to hire 100,000 veterans over the next two years.”

ATA will use the FASTPORT trucking tracking system to match veterans with fleets in need of drivers.

“A strong trucking industry is critical to the growth of our country and our economy. ATA’s pledge to hire and support 100,000 veterans sets a tremendous example to others to follow,” said Eric Eversole, executive director of Hiring Our Heroes.

“Trucking has always been a favorite industry for our veterans because they are already trained to succeed in many great career paths,” said Bill McLennan, CEO of FASTPORT. “ATA’s leadership and call to action from its members demonstrate the industry’s affinity for hiring veterans and we are honored to help our talented veterans find great careers with those great employers in the trucking industry.”

The U.S. Chamber veteran hiring program was launched March 2011, with more than 1,700 companies agreeing to participate. According to the ATA, the chamber program has resulted in 369,000 “confirmed hires” of veterans.
J.B. Hunt signed on to FASTPORT in May.

“By joining forces with Hiring Our Heroes and FASTPORT, J.B. Hunt will be able to showcase our multiple career avenues in a ‘one-stop-shop’ for veterans and their spouses and communicate quickly and directly with those that have already made the transition to civilian life as well as those that are just starting the process out-of-country,” said Craig Harper, J.B. Hunt executive vice president for driver personnel and operations.

Harper said company founder J.B. Hunt transitioned from the U.S. Army to become a truck driver and build what is now a global logistics company.
“We need more service men and women to follow in his footsteps,” Harper said.

USA Truck is another of the participating companies and this month received the Employer Support of the Guard and Reserve’s Patriot Award for its long-time support of the armed forces.

An estimated 25 percent of USA Truck’s employees have served or are currently serving in the military. “We consider the hiring of the men and women of our nation’s Armed Forces to be our corporate responsibility for the sacrifices made by them and their families. We make a concerted effort to bring veterans onto our team, both in driving and non-driving capacities, because they embody many of the characteristics we value — among them drive, discipline, pride, motivation, a strong work ethic and high moral fiber,” said USA’s Burton Weis.

“It is rare in business and in life to find an opportunity that is a win-win for all involved, but that’s what Hiring Our Heroes is – a win for those veterans returning from service looking to transition to civilian life and a win for the trucking industry which is desperate to find dedicated, hard-working, and safety-minded people to fill many thousands of open positions as drivers or technicians,” said Duane Long, ATA chairman.

Those in the industry are hopeful an influx of veterans will help address a driver shortage.

“How big the shortage is depends on whom you ask. But there are fewer working truck drivers today than there were before the recession. Driver turnover at large truckload fleets has been above 90 percent for eight straight quarters. And driver pay remains below the U.S. average,” according to a report by the Journal of Commerce. “A growing number of trucking executives say poor — and unpredictable — pay is the primary reason for the shortage of new drivers.”