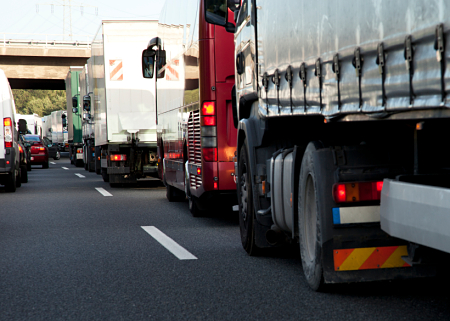 For truckers, congested traffic is more than a source of frustration – it cuts into the bottom line, affecting schedules, deliveries and workloads.

This means truckers try to steer away from highway choke points when a reasonable alternative exists.

The American Transportation Research Institute (ATRI) recently released its list of the Top 100 congested locations in the U.S. The list is the product of ATRI’s 2014 Congestion Impact Analysis of Freight-Significant Highway Locations, which looked at truck-oriented congestion at 250 locations on the national highway system using customized software applications and analysis methods.

The trucking industry contributed terabytes of data from trucking management and operations centers to aid in ranking each location.

The data is used in conjunction with FHWA’s Freight Performance Measures (FPM) initiative.

The highest ranked congestion location in the 2014 study is the George Washington Bridge, which connects New York and New Jersey. Second in the list is Chicago’s Circle Interchange, where I-290 intersects with I-90 and I-94. The Circle Interchange dropped from first to second on the list from 2013.

“ATRI’s identification of congestion impacts at freight-significant locations is a critical tool in the transportation planning toolbox. Better-informed decisions mean more targeted infrastructure investment at critical freight nodes,” said Matt Hart, President of the Illinois Trucking Association and a member of ATRI’s Research Advisory Committee. “Here in Illinois we’re seeing first-hand how ATRI’s identification of the Circle Interchange as the number one freight bottleneck in previous studies led to a significant state investment to fix the chokepoint.”

The FPM congestion monitoring effort combines anonymous truck GPS location information with sophisticated software applications and analysis techniques to assess the levels at which truck-based freight was affected by traffic congestion in 2014. The result is a clear documentation of system chokepoints, especially during peak travel times in urban locations.

“The impact of traffic congestion on truck travel is well known, but rarely in a fashion where we can pinpoint projects for resource allocation and reconstruction,” said Keith Bucklew, manager of Multimodal Planning for the Indiana DOT. “The FPM program continues to provide real value to public sector transportation managers.”

Another traffic study, the Urban Mobility Report published by the Texas Transportation Institute at Texas A&M, laid at least some of the blame for increased congestion on the economic recovery. The report noted that after years of slight declines in overall traffic congestion – attributable to the economic downturn and higher fuel prices – leading indicators suggested that as the economy is rebounding, so too are traffic problems.
Unclogging America’s transportation network carries a massive price tag.

In December, the American Association of State Highway and Transportation Officials (AASHTO) and the American Public Transportation Association (APTA) released the “2015 Bottom Line Report” on transportation investment needs. The report found that to meet current demand it will require an annual capital investment over six years by all levels of government in the amount of $120 billion in the nation’s highway and bridge network and $43 billion in America’s public transportation infrastructure. Despite those dramatic investment needs, currently only $83 billion is invested in roads and bridges, while just $17.1 billion is invested in public transit.

“The top priority for every state transportation department is to keep America’s surface transportation system operating safely and efficiently,” said AASHTO Executive Director Bud Wright. While the new report highlights a major gap between what is needed and what is actually spent, Wright said that aiming for a more robust investment level “could target the backlog of repair and rehabilitation projects across the country. Workers would benefit – as would the entire U.S. economy.”

“As the demand for public transportation increases, our systems are strained and in dire need of strong investment,” said APTA President and CEO Michael Melaniphy. “After years of a lack of robust investment, the public transit infrastructure that our communities and businesses rely on to grow and prosper is crumbling. Investment in public transit is a key ingredient to driving growth in our communities, attracting development and causing increased property values along its corridors.”