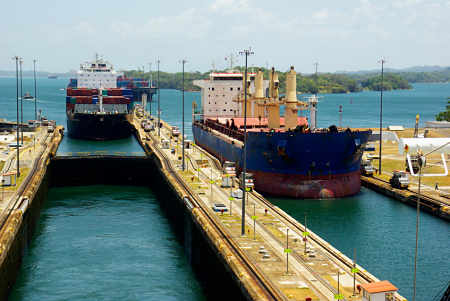 The anticipated 2016 completion of the expansion of the Panama Canal will mean more “mega ships” arriving at U.S. ports and will impact U.S. trucking, according to a report recently released by the U.S. DOT Maritime Administration.

The Panama Canal Expansion Study, the first of a two-part effort, predicts the larger Post Panamax vessels will enjoy greater access to U.S. ports, especially on the East and Gulf coasts.

The report says the impact on ports, waterways and intermodal freight systems will be significant.

Long term, the expansion of the canal and larger vessel traffic could shift shipping patterns in the U.S. and affect the national transportation system.

The report’s authors say some U.S. exports, such as grain, coal, petroleum products and LNG gas, could become more competitive in global markets due to more cost-effective shipping.

“Terminals will need to increase the number of trucks they can efficiently handle each hour or each day by expanding physical gate facilities, speeding up processing through existing facilities (for example, with improved information technology and automation) and/or increasing their hours of operations,” the report says. “If not carefully managed, peaks in truck traffic may contribute to excessive congestion, emissions or other adverse impacts in areas around the port.”

Global trade in general will see a major shift due to the expansion of the canal, according to Adie Tomer, a senior research fellow at the Brookings Institution Metropolitan Policy Program.

“Along the US Atlantic Coast, there is a veritable arms race between ports to dredge their harbors, roll out new cranes and obtain a bigger slice of American logistics business. Ports from Miami to Boston are making major bets—often involving upwards of a billion dollars—that they’ll be winners in the new Panamax world,” said Tomer. “Yet, in the short run, the American logistics pie is only set to grow in a similar range as macroeconomic growth—at rates around 2-3 percent. That means a major winner in one market likely will mean relative losses in others. Meanwhile, the Pacific ports and their naturally deep harbors still loom as the preferred shipping spot for most Asian goods, and any investments in the North American land bridge only strengthen their position,” he added.

The mega ships can carry 13,000 TEUs, the equivalent of 13,000 standard 20-foot containers – nearly three times as many boxes as the ships that now pass through the canal.

“You better be ready to handle these big ships because that is what’s coming,” said Alberto Alemán, former head of the Panama Canal Authority and now chief executive of ABCO Global, a logistics advisory company.

“If you have a port today and don’t have the capacity to handle the new ships, pretty soon you will be without ships or must be content to be a small port where older, smaller ships call,” he said.

The Port of Miami is one port banking on being a recipient of more business due to the canal expansion.

To prepare for the Post Panamax era, the Port of Miami is deepening its harbor from 44 feet to a depth of 50-52 feet and is widening the shipping channel. The port has added a new tunnel to accommodate truck traffic and a rail link to speed access.

The Port of Miami will have spent $1.3 billion in local, state and federal monies for the expansion and upgrades but port officials believe the investment will pay off.

The Panama Canal expansion is expected to be complete in 2016 when the third set of locks is open to traffic.

While the shipping industry is eagerly awaiting the expansion, there are interests who would like to see a fourth set of locks installed.

“We are exploring our participation in all canal projects, especially in the design, construction and financing of a fourth set of locks,” said Mo Wenhe, chairman of Beijing-based China Harbour Engineering Company (CHEC).
CHEC, which announced plans to set up a regional headquarters in Panama, has 10,000 employees and does work in 80 countries.