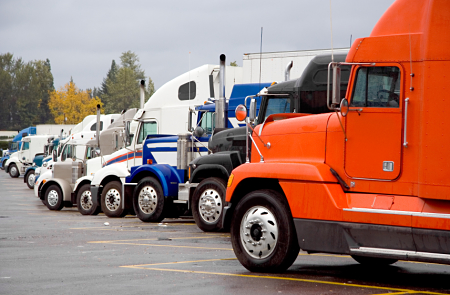 With the national spotlight shining brightly on truck driver Hours of Service (HOS), the issue of accessible parking for truck drivers has reemerged.

According to the American Trucking Associations (ATA), a parking shortage for American truckers has existed for more than two decades and is only getting worse.

An improving economy has seen an upswing in new truck orders for 2015.

Toss in the fact that lower fuel prices are prompting many shippers to switch from rail to trucks and the problem only grows.

According to a survey taken in 2012, as many as 70 percent of truckers traveling on Interstate 5 in California said they found full truck stops when they rolled in for a stop. The researchers at the University of California Berkeley said more than half of the truckers found full stops every other day.

Another study conducted on I-40 in Arizona and New Mexico found about 300 truck parking spots in a section of I-40 that handled 10,000 trucks every day.

An informal Web survey in 2013 drew nearly 4,000 responses from truck drivers who said it takes them on average one hour to find parking for the night. Twenty-eight percent said they regularly or occasionally stay on freeway ramps and 52 percent said they pull up behind shopping centers.

Hope Rivenburg spearheaded the web survey. She played a pivotal role in getting language in federal transportation legislation which made truck parking eligible for federal funding.

Despite the parking crunch, federal regulators are limiting the number of hours truckers can be on the road without taking a rest break.

By law, they must stop at least once every eight hours of driving and quit for the equivalent of a night after a total of 11 hours. “It’s a huge added stress to a driver who is trying to focus on operating safely,” says Ryan Bowley, government-affairs director for the Owner-Operator Independent Drivers Association.

Industry experts are aware of the problem. The truck-parking shortage ranked sixth in the American Transportation Research Institute’s list of top 10 issues critical to the industry last fall. The advisory committee to the Federal Motor Carrier Safety Administration put it in a wish list for congressional spending on surface transportation.

Darrin Roth, vice president of highway operations for ATA, hopes that another study, called for under federal law and due out in the next few months, will make a difference.

“That at least allows us to have the conversation with Congress and allow them to understand the extent of the problem,” he says.

Caitlin Raymond, director of FHWA’s Office of Freight Management and Operations, said truck parking is one of the priorities her office is considering.

The freight office is exploring ways to guide trucking and government agencies in making the industry more resilient to such events as weather emergencies, economic swings and workforce problems that arise from poor planning, Raymond said.

To make the supply chain more resilient in emergencies, such as Superstorm Sandy, state agencies need to provide reliable detour and closure information as well as parking for truckers, she said.

“If you’re involved at all in plans for resiliency, make sure you take a look at truck-parking capacity in your areas,” said Raymond.

Lisa Mullings, chief executive of the National Association of Truck Stop Operators, said she believes “the fastest, most effective way to increase truck parking is for the trucking industry to demand it from the truck stops” with whom they negotiate fuel contracts.

Parking could be part of the deal, she says. “The private sector is more often than not able to do things more cheaply than the public,” she added, citing one Iowa truck stop that recently increased its truck parking from 800 to 900 spaces.