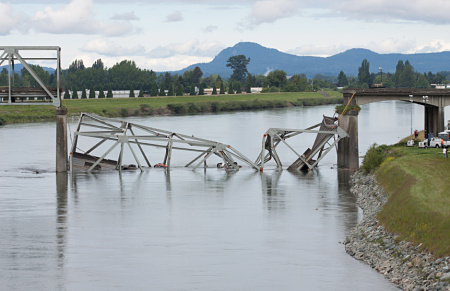 A 2013 crash of an oversized truck on an Interstate 5 bridge over the Skagit River north of Seattle caused a section of the bridge to collapse, sending three vehicles into the river.

The crash prompted the Washington State DOT (WSDOT) to develop a state route bridge vertical clearance trip planner to aid truckers in mapping out their routes.

An investigation by the National Transportation Safety Board (NTSB) found one of the causes of the crash was insufficient route planning on the part of the truck driver.

“This innovation offers truckers a new tool to find the safest route for their trip,” said Gov. Jay Inslee. “It applies lessons learned from the Skagit River Bridge replacement, and it will reduce the risk of collisions throughout the system.”

Using GIS mapping technology, the trip planner shows drivers on any given route should be avoided or approached with caution because of variable heights.

The tool makes it more convenient for truck drivers to check clearance levels when applying for trip permits.

The trip planner database will be available to third-party developers who have expressed interest in creating navigation apps. This open data approach allows the private sector to use state-generated data to develop even more tools to improve highway and motorist safety.

“We’ve taken advantage of existing technology to help improve safety on our roads,” said Transportation Secretary Lynn Peterson. “Sharing this data through private-public partnerships will help get this information into even more customers’ hands.”

The Washington Trucking Association (WTA) consulted on the development of the trip planner and members of WTA conducted beta testing on the new tool.

“This is a huge step in the right direction,” said Sheri Call, WTA’s vice president of government of relations, noting drivers previously had to look up bridge data online or in a book and then consult their own maps.

In addition to developing the new mapping tool, WSDOT also clarified its commercial vehicle policies, initiated a statewide review of all low-clearance structures, added the bridge clearance list to its road restrictions webpage and developed a step-by-step guide to help drivers determine the appropriate permit to request.

All bridges with a minimum clearance of 16.6 inches and lower will also be re-measured as part of the state’s review targeted for completion by the end of 2015.

WSDOT has plans to expand the trip planner to include displaying lane-by-lane height information. The update is scheduled for a 2017 completion.

The section of I-15 damaged by the crash carries about 70,000 vehicles per day. I-5 is the state’s major north-south roadway connected Oregon and Canada. After the 2013 crash and bridge collapse, workers installed an emergency span that was replaced last year.

WSDOT updated the Skagit River Bridge by replacing the support brace’s arc design with a horizontal design that provides a uniform vertical clearance of 18 feet across the width of the bridge.

“This costly accident was the result of a series of mistakes that could have been avoided,” said NTSB Acting Chairman Christopher Hart, “The recommendations issued by the NTSB highlight the importance of driver awareness and the states’ responsibilities to provide adequate resources about low clearances.”

As a result of the investigation, NTSB issued 18 safety recommendations to the Federal Highway Administration; the 50 states, the District of Columbia and the Commonwealth of Puerto Rico; the Washington State Department of Transportation; the American Association of State Highway and Transportation Officials; the American Association of Motor Vehicle Administrators; the Governors Highway Safety Association; the Commercial Vehicle Safety Alliance; the Specialized Carriers & Rigging Association; and Rand McNally, Nokia HERE, and Google Inc.