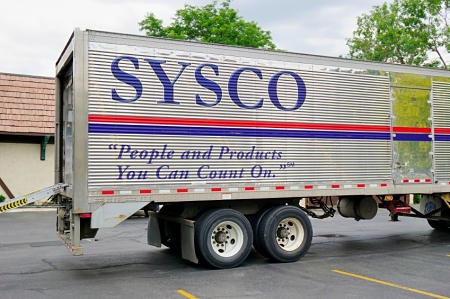 The Federal Trade Commission (FTC) is fighting the proposed merger of Sysco and US Foods on the basis that such a merger would violate antitrust laws.

Sysco and US Foods are the largest broadline food service distributors in the U.S. and operate two of the largest truck fleets in the country.

“This proposed merger would eliminate significant competition in the marketplace and create a dominant national broadline foodservice distributor,” said Debbie Feinstein, the Director of the FTC’s Bureau of Competition. “Consumers across the country, and the businesses that serve them, benefit from the healthy competition between Sysco and US Foods, whether they eat at a restaurant, hotel, or a hospital.”

The FTC filed an administrative complaint against the merger and is seeking a temporary restraining order to prevent the merger from occurring.

According to the FTC filing, a combined Sysco/US Foods would account for 75 percent of the national market for broadline distribution services. Broadline distributors offer extensive product lines, including national-brand and private-label food products, and provide frequent and flexible delivery, high levels of customer service, and other value-added services such as order tracking, menu planning, and nutritional information.

According to the FTC filing, the merger presents a “significant risk” of competitive harm to two sets of customers who rely on broadline food service distribution:

The Commission also charges that the proposed sale of 11 US Foods distribution centers to Performance Food Group would neither enable PFG to replace US Foods as a competitor nor counteract the significant competitive harm caused by the merger. According to the FTC, even with the addition of 11 distribution centers, PFG would not approach the scale or competitiveness of US Foods today, and therefore would not restore the competition eliminated by this merger.

The following state attorneys general have joined the FTC’s complaint for a preliminary injunction to be filed in federal district court: California, Illinois, Iowa, Maryland, Minnesota, Nebraska, Ohio, Virginia, Pennsylvania, Tennessee and the District of Columbia.

The administrative trial is scheduled to begin on July 21, 2015.

Bill DeLaney, Sysco’s president and CEO, said his company believes the FTC decision is based on an erroneous view of the competitive dynamics of the food distribution industry.

“The facts are strongly in our favor and we look forward to making our case in court,” said DeLaney. “Those of us who work in this industry every day know it is fiercely competitive. Customers of all types have access to food distribution services from a wide variety of companies and any number of channels. In fact, the overwhelming majority of restaurants and food operators choose their foodservice distributor locally, where they have choices among many excellent companies.”

“For example, the FTC claims that Sysco and US Foods combined have a 75 percent market share in an ill-defined ‘national broadline market,’ ignoring the fact that the vast majority of ‘national customers’ use multiple regional or local distributors.

Additionally, the FTC claims the merger would harm competition in 32 local markets, ignoring the existence of myriad local suppliers, including broadline companies, specialty companies, cash-and-carry, and club stores with whom Sysco and US Foods compete on a daily basis. This merger has always been about serving customers better and driving costs out of the system,” DeLaney said. “By unlocking at least $600 million in annualized cost synergies, the merger will allow Sysco to lower costs for customers, deliver better service and improve selection across all product segments, all of which will increase competition across the entire foodservice distribution industry to the benefit of customers,” he added.