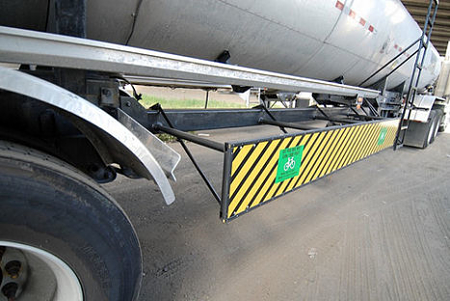 New York City recently announced it would retrofit 240 city trucks with side guards this year as part of its Vision Zero safety program. The side guards are rails placed between the front and rear wheels of the truck to protect pedestrians, cyclists and motorcyclists from being caught under the vehicle in a collision.

“We are committed to using every tool in our box – enforcement, education, and engineering – to save lives and make our streets safer,” said Mayor Bill de Blasio. “Installing side guards on our city trucks will help prevent fatal collisions.”
City trucks account for only 3.6 percent of vehicles on the road in NYC but are involved with 12.3 percent of pedestrian fatalities and 32 percent of cyclist fatalities, according to the city.

“We are serious about Vision Zero, and that means looking at our vehicles and our drivers to make sure they’re as safe as they can be. New York City operates the largest municipal fleet in the U.S. with over 27,000 vehicles. When we change the way we do business like this, it changes our streets for the better,” said Department of Citywide Administrative Services (DCAS) Commissioner Stacey Cumberbatch. “DCAS is working in partnership with city agencies to improve safety for the public and our drivers including installing these life-saving side guards.”

The expansion to 240 vehicles will make New York City the largest municipal fleet in the nation to install truck side guards. The devices have also been implemented on varying scales in Boston, Somerville, and Newton, Massachusetts and in Portland, Oregon. In the United Kingdom, widespread adoption of side guards is credited with reducing fatalities and severe injuries in side impacts by 61 percent for bicyclists and 20 percent for pedestrians.

In May 2014, DCAS partnered with the Volpe Center at the US Department for Transportation (DOT) to conduct a review of the effectiveness and specifications for truck guards, including reviewing international standards for side guard usage and exemptions.

Volpe worked with the city’s inter-agency fleet team to review each department’s specific equipment. The final report identified 4,734 trucks appropriate for side guards and proposed specifications for their installation. The city will install side guards on approximately 240 of the eligible city fleet during 2015, exempting trucks under 10,000 pounds, street sweepers, fire engines, and car carriers. The program will help identify any potential technical or operational issues for a wide variety of city vehicles. The first round of installation began with 18 medium size trucks from Parks, DCAS, and DEP. If successful, the guards could be expanded to all appropriate vehicles within the city’s fleet. Each guard costs approximately $3,000 to purchase and install.

As part of Vision Zero, DCAS and representatives of the major city fleets, known as the Fleet Federation, have been developing multiple approaches for improving the safety of city fleet operations. Fleet is improving how collisions are tracked and analyzed across all agencies, and is also looking at additional ways city vehicles can be designed and procured. The city has greatly expanded its defensive driving training, with more than 12,000 city staff trained in 2014 and is also installing telematics on city vehicles to better monitor safe driving behavior.

“Safety on our roads continues to be paramount in our minds, and New York City is leading by example, taking measurable steps towards safer streets for pedestrians, bicyclist and motorists. Sideguards have a proven record of preventing fatalities and injuries on the road and are a worthy investment of tax-payer dollars,” said Finance Committee Chair Julissa Ferreras.

“If we are to truly reduce traffic and pedestrian fatalities, sideguard use must be increased dramatically,” said City Council Member Corey Johnson. “I applaud the de Blasio Administration for taking this important step. One fatality is too many. I am the proud sponsor of legislation that would expand the use of sideguards even further and I look forward to working with the city as we strive to make Vision Zero a reality.”

“After a decade of safe streets advocates demanding action on pedestrian and cyclist fatalities involving trucks, we commend Mayor de Blasio for showing the leadership to require side-guards on 240 city trucks,” said Paul Steely White, Executive Director of Transportation Alternatives. “We look forward to seeing this first wave demonstrate the life-saving potential of truck guards so we can see them expanded to even more vehicles in the city’s fleet and beyond.”