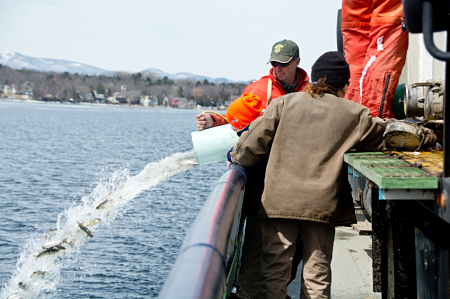 Low water levels due to drought in California’s Sacramento River have forced wildlife officials to turn to trucking for the second year in a row in a bid to save 12 million juvenile Chinook salmon.

The smolts are being transported in container trucks over a 22-day period to be released into Battle Creek, near the Coleman National Fish Hatchery in Anderson.

Releasing the fish upriver increases the odds they will return as adults. Biologists fear the warm water temperatures and low water levels will significantly reduce the number of smolts that reach the ocean.

“Trucking our juvenile salmon to the Bay-Delta is not normal procedure for Coleman National Fish Hatchery, but due to the drought, it is the best option we have this year,” said Robert Clarke of the U.S. Fish & Wildlife Service. “Trucking juveniles drastically increases straying and reduces adult returns to the Upper River and hatchery. However, if we were to release our fish at the hatchery under the current drought conditions, it is very likely we would not get enough adults back to meet our egg needs three years from now.”

The process involving the juvenile salmon will run into mid-May as the smolts are transported 180-miles to one of three sites where they are placed in pens and then released.

The container trucks involved in the process hold 2,800 gallons of water and 130,000 smolts.

Last year, fish and wildlife officials transported and released 7.5 million smolts before a late March storm improved conditions to the point where 4.5 million more could be released upriver. If conditions don’t improve, all 12 million will be released in the Delta this year.

The salmon program comes as Governor Jerry Brown announced a statewide initiative to save water.

“Today we are standing on dry grass where there should be five feet of snow. This historic drought demands unprecedented action,” said Governor Brown. “Therefore, I’m issuing an executive order mandating substantial water reductions across our state. As Californians, we must pull together and save water in every way possible.”

For more than two years, the state’s experts have been managing water resources to ensure that the state survives this drought and is better prepared for the next one. Last year, the governor proclaimed a drought state of emergency. The state has taken steps to make sure that water is available for human health and safety, growing food, fighting fires and protecting fish and wildlife.

Millions have been spent helping thousands of California families most impacted by the drought pay their bills, put food on their tables and have water to drink.

For the first time in state history, the governor has directed the State Water Resources Control Board to implement mandatory water reductions in cities and towns across California to reduce water usage by 25 percent. This savings amounts to approximately 1.5 million acre-feet of water over the next nine months or nearly as much as is currently in Lake Oroville.

To save more water now, the order will also:

The order also prioritizes state review and decision-making of water infrastructure projects and requires state agencies to report to the governor’s office on any application pending for more than 90 days;