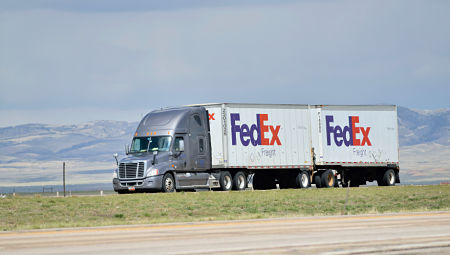 FedEx Corporation and TNT Express have reached agreement for a $4.8 billion buyout of the Amsterdam-based company by the U.S.-based package carrier.

The combined companies will be a strong global competitor in the transportation logistics industry, with FedEx bringing a strong presence in North America and Asia and TNT Express bringing a European presence to the mix.

TNT Express customers will be able to tap into FedEx’s portfolio of solutions, including global air express, freight forwarding, contract logistics and surface transportation capabilities, according to a joint statement.

“We believe that this strategic acquisition will add significant value for FedEx shareowners, team members and customers around the globe. This transaction allows us to quickly broaden our portfolio of international transportation solutions to take advantage of market trends – especially the continuing growth of global e-commerce – and positions FedEx for greater long-term profitable growth,” said Frederick W. Smith, chairman and CEO of FedEx Corp.

TNT Express CEO Tex Gunning said the offer came unsolicited. “This offer comes at a time of important transformations within TNT Express and we were fully geared to executing our stand-alone strategy. But while we did not solicit an acquisition, we truly believe that FedEx’s proposal, both from a financial and a non-financial view is good news for all stakeholders. Our people and customers can profit from the true global reach and expanded propositions, while with this offer our shareholders can already reap benefits today that otherwise would only have been available in the longer run.”

Both firms noted in a statement that they expect to wrap up the acquisition within the first six months of 2016 and don’t foresee any major anti-trust complications.

Both FedEx and TNT also agreed to several caveats as part of this deal:

United Parcel Service attempted to acquire TNT Express nearly two years ago in a deal that was disallowed by the European Commission due to anti-competitive issues.

TNT Express Chairman Anthony Burgmans said the FedEx deal is “much simpler” than the UPS one, which means fewer synergies but a better strategic fit. “We’re pored over this in detail, and we feel very confident,” he said. “Last time we thought it was doable but complex, but this time, we are as certain as can be in life that this deal will close in Brussels.”

Roger Sumner-Rivers, an industry expert and founder of pioneering internet couriers ParcelHero, which delivers fast, reliable and cost-effective courier services to over 220 countries, told Forbes the acquisition would be good for the industry.

“It’s not only the courier industry that will benefit, but it is customers that should ultimately be the real winner,” he said. He also believes the resulting company, will lead to “stronger competition” within Europe and globally.

“This merger will most likely succeed because FedEx and TNT are a shrewder fit than UPS and TNT was. They complement each other without overlapping significantly,” he said. “UPS’ primary goal in seeking to takeover TNT was to build on its already substantial European business, which would have resulted in the combined company holding an unassailable 30 percent of the European market. The FedEx-TNT merger is far less likely to fall foul of EU competition authorities.”

The FedEx-TNT tie up would command around 17-18 percent of the market.

A strong dollar against the Euro proved to be a boon for FedEx. FedEx timed the purchase to save 22 percent on the price from a year ago.