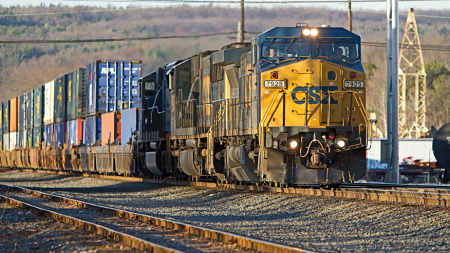 Railroad companies Amtrak and CSX have filed a lawsuit against a North Carolina trucking firm, alleging that the firm caused a March derailment that injured 55 people.

Filed in a Raleigh federal court, the suit against Guy M. Turner Inc. of Greensboro said the company failed to take safety precautions or warn officials that the track was blocked.

“Turner Transfer knew or should have known that its activities were inherently dangerous, but nevertheless failed to take reasonable precautions to avoid injury or ensure that such precautions were taken,” the lawsuit says.

The oversized truck carrying electrical equipment was attempting to make a left turn when it got stuck at the railway crossing in Halifax, North Carolina. The shipment was bound from North Carolina to New Jersey.

Witnesses have said that the driver of the truck spent between 15 and 20 minutes fussing over the load and then moving back and forth in the crossing before the railroad warning arms came down. He jumped out just before impact.
The lawsuit doesn’t specify an amount of damages being sought but says it would be more than $75,000 for each company.

CSX and Amtrak also expect to face personal injury claims from people in the crash, but the trucking company should bear financial responsibility for those claims because it caused the crash, according to the lawsuit.

Spokeswomen for CSX and Amtrak said the companies couldn’t comment on pending litigation. The lawsuit says the trucking company is responsible for the actions of the truck driver and two civilian escort drivers. It also says the company was negligent for employing a driver with a history of safety violations.

The 15-page lawsuit claims that the train rammed the truck because neither CSX nor Amtrak was notified that there was something on the tracks at the grade crossing off Highway 903.

The suit claims the trucking company, the driver and all those escorting the truck share responsibility for the crash because they failed on numerous counts – from checking out the route beforehand to notifying the railroad companies that there was a truck stuck on the tracks.

Witnesses said the truck sat on the tracks for quite a while before the train plowed into it. The lawsuit makes note of that and said “the driver made multiple failed attempts to complete a left turn on to the Highway 301 Bypass.”

The truck was being accompanied by a pair of privately owned escort vehicles as well as a state highway patrol trooper, which caught the attention of witnesses.

“There was a state trooper and two regular vehicles with flags on their poles,” said eyewitness Henry Lee Jones, who acknowledged that there was an oversized load marker.

The suit claims that the truck’s driver, John Black, was incompetent to operate that truck and that Guy Turner Transfer company did not adequately train and supervise him.

Further, the suit says that the company should have known that Black had a history of safety violations including speeding and operating with a revoked license.

The driver in the crash, John Black, had been cited previously for at least a dozen traffic violations, including speeding and driving with a revoked license multiple times, according to Department of Motor Vehicle records.

In Illinois, Black was arrested in December 2012 and charged with exceeding the permitted weight limit on his load. He was quickly released on a $177 secured bond, but failed to appear in court the following month.

Black does have a valid commercial driver’s license, but did not need to pass a criminal background check to get it, according to the North Carolina Division of Motor Vehicles.

A toll-free emergency number is prominently displayed at each crossing to reach reaches dispatchers who can radio trains to stop.

Though a trooper was on the scene, a call for help to the railroad was never made because the truck was not stuck on the tracks.

The North Carolina Escort Vehicle Operator Hand Book states if a truck gets stuck within 15 feet of a railroad track, the first thing to do is get help and call the emergency number listed at the intersection.

“When an emergency call regarding a vehicle or a person on the tracks is received, CSX’s public safety communications personnel immediately contact the train dispatcher and trains in the area are directed to stop,” said Seay.