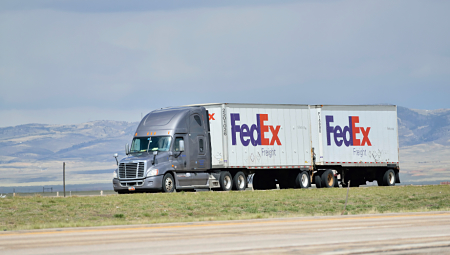 Fedex Corp. and other freight carriers are pushing Congress to open U.S. highways to a new generation of bigger truck trailers despite opposition from safety groups.

The freight carriers are spending millions of dollars lobbying Congress in support of a $53.5 billion transportation spending bill that removes some safety measures the government wants in place.

The bill would also do away with plans to require trucking companies to carry higher insurance coverages and make it harder for regulators to re-impose stronger rest requirements for drivers.

The trucking industry is a formidable force in Washington, spending $9.85 million lobbying Congress last year, and making $7.96 million in contributions to political candidates, parties and action committees, according to the Center for Responsive Politics.

Lowey and others decried how the industry was able to insert sweeping policy changes into unrelated budget legislation. A provision in the appropriations bill that would allow two trailers of up to 33-feet to be hauled in tandem, up from the current 28-foot limit, is drawing the most concern.

The longer trucks will be harder for drivers to handle, said Jackie Gillan, president of Advocates for Highway and Auto Safety, a coalition of consumer-rights groups and insurance companies. She cited research showing double-trailer combinations have crash rates 15 percent higher than single-trailer rigs.

“This is the most aggressive attack on safety I’ve seen in my lifetime,” she said.

Transportation Secretary Anthony Foxx declined to comment on whether he could support 33-foot trailers, telling reporters that his department hasn’t yet completed a comprehensive safety study. He did say the Obama administration is concerned about Congress making policy changes in an appropriations bill.

The Coalition for Efficient and Responsible Trucking says safety isn’t an issue. OOIDA’s David Osiecki said that research also shows stopping distances are the same with 28-foot and 33-foot trailers, and the longer trucks are more stable.

Existing twin 28-foot trailers are typically full before they reach the federal weight limit of 80,000 pounds. Even 33- foot trailer combos crammed with packages wouldn’t exceed the standard weight, while they would be able to carry 18 percent more freight.

One of the main hurdles for the provision may be public sentiment. About 76 percent of people are against allowing more longer or heavier trucks on the road, according to a poll that safety groups, including Gillan’s, commissioned last year.

In addition to bigger trucks, the House bill would add conditions for any attempt by the Federal Motor Carrier Safety Administration to re-institute a 2013 rule forcing drivers to get two nights sleep in a row after reaching a weekly time limit for driving. That regulation was intended to close a loophole that allowed some drivers to legally stay on the road as long as 82 hours over eight days.

Another provision would squash a Transportation Department effort to revisit a rule requiring trucking companies carry a minimum of $750,000 in liability insurance. That level hasn’t been changed since 1980. Regulators haven’t indicated what the new level should be, but have indicated they would like to study the matter. The department has suggested it would take a $3.2 million policy to have the same buying power as $750,000 three decades ago.

The House legislation wouldn’t permit any money to be spent on the effort.

While the carriers are lobbying for larger trailers in Congress, the American Trucking Associations (ATA) was testifying before the House Transportation and Infrastructure Committee’s Highway and Transit Subcommittee that continued improvements in truck safety will need new strategies.

“The truck-involved fatality rate has decreased 74 percent since 1975 and in the last decade alone, it has dropped 38 percent,” said Tom Kretsinger, president and CEO of American Central Transport, on behalf of ATA. “But continued improvement will require an acknowledgement of the principal causes of truck crashes and appropriate countermeasures.”

Specifically, Kretsinger cites data that highlights the role of the driver in 87 percent of truck crashes and adds that addressing driver behavior and truck safety falls into three broad categories “rules, enforcement and a partnership to promote voluntary initiatives.”