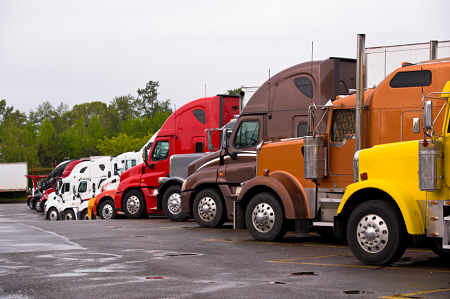 American Trucking Trends is ATA’s annual compendium of data on the trucking industry.

Other findings include the following:

“Trends is a valuable resource for showing just how critical, how essential, our industry is,” said ATA President and CEO Bill Graves. “It is one thing to say trucking is our economy’s lifeblood, but it is quite another to show it. And Trends shows it clearly: trucking is, and will continue to be, the dominant way to move goods in this country.”

While the Trends report shows a positive side of the industry, the Trucking Conditions Index (TCI), released by the forecasting firm FTR, indicates softness in the market over the past several months.

The TCI reported that the industry had its third straight monthly drop in March, which it attributes to dramatic decreases in fuel prices and a slight lessening of demand for truck services.

“Conditions for truckers and fleets remains quite positive despite the recent dip in the index,” said Jonathan Starks, FTR’s director of transportation analysis. “This dip followed a very strong increase in the TCI over the last half of 2014 as solid volumes, good rate gains, and falling diesel prices helped propel the December index to its first double-digit reading since early 2010.”

He said the recent data on the U.S. economy has been mixed with the first quarter gross domestic product coming in substantially weaker but sales and employment picking back up at the beginning of the second quarter.

“This recovery has been unusual in that first quarter GDP has generally been much weaker than the growth seen the rest of the year,” Starks said. “This gives us optimism that the truck markets will not be significantly slowed, although it is likely that manufacturing output will be less strong in 2015. This will be especially true for exports of U.S. goods, as the dollar has risen over 20 percent in the last year and our goods are now more expensive and less competitive in global markets.”

FTR said it also keeping an eye on sales and inventories data because, so far, the drop in fuel costs has not directly translated into large gains in consumer spending.

“If consumers save that cash, it will likely mean another year of slow and steady economic growth, however, if production doesn’t slow to follow suit, then we will get an inventory glut that will have to be quickly worked down. If they start spending, it could help fuel another surge in economic growth like we saw last year,” Starks said.

Three business economists presenting at the April 28 National Tank Truck Carriers annual conference said first-quarter growth of 0.2% per year was due to harsh weather and the West Coast ports slowdown and not a fundamentally poor economy.

Trucking, they said, should continue to enjoy another year of strong growth, in part because two major shipper groups — petroleum and chemical production — will continue to grow, the economists said.

“There is a virtuous cycle in place,” said Martha Moore of the American Chemistry Council, suggesting that recent economic growth is begetting more of same for the near future.

“We should begin to see something that is moving toward the 3% growth rate that we are more or less expecting for the last three quarters of the year,” said David Altig, director of research at the Federal Reserve Bank of Atlanta.