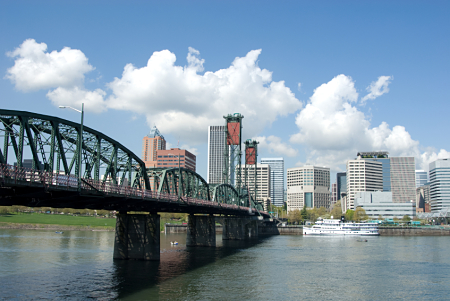 As Congress stumbles toward yet another short-term extension for funding the Highway Trust Fund, Oregon is preparing to launch the nation’s first pay-by-the-mile or Vehicle Miles Traveled (VMT) road usage funding program.

OReGO, as it is called, will roll out July 1. The OReGO program is a voluntary one where drivers will be able to opt in to pay road fees based on who much they travel.

“Oregon is pioneering the nation’s first pay-by-the-mile road usage charge system. We now have three trusted private partners on board — Azuga, Sanef and Verizon Telematics — that Oregonians can choose from when they volunteer to enroll their vehicles in OReGO,” said Jim Whitty, manager of the Oregon Department of Transportation’s Office of Innovative Partnerships and Alternative Funding. “It’s a huge step for Oregon and the nation.”

Participants in OReGO, which launches July 1, are volunteering for the program and will be charged a per mile fee, then either receive a credit or a bill for the difference in gas taxes paid at the pump.

Several states — including Washington, California, Idaho, Colorado and others — are considering similar pay-by-the-mile road usage charge systems. Oregon has already conducted two pilot projects to test road usage charging, which led the 2013 Legislature to create the OReGO program and launch it statewide with up to 5,000 volunteer vehicle owners starting in July. Anyone interested in learning more about the program or potentially participating is encouraged to join the interest list at www.myOReGO.org.

“This is the wave of the future,” Whitty said. “We’ve got to find a more sustainable and fair way to fund highway maintenance and new construction or our economy will suffer as our roads get more crowded and less safe.”

The just-emerging VMT concept is borne of more fuel-efficient and alternative fuel vehicles that have the potential to turn the traditional highway funding model on its ear.

“When fuel is not being sold, we’re not collecting revenue for maintaining those roads,” Michelle Godfrey with the Oregon DOT. “So we have to have an alternative.”

Over the last 20 years, Godfrey said a variety of factors have made it harder to fund road construction and maintenance projects in the state. With higher costs for materials like concrete and rebar, combined with less state gas tax revenue and federal highway money, officials said it’s been especially hard to maintain Oregon’s roads.

Oregon is one of a handful of states that want to have another funding model in place and VMT is getting the attention of a large number of jurisdictions.

Oregon’s program will include the following operational details:

The American Trucking Associations (ATA), one of the leading groups representing the country’s truckers, has long been on the record against a VMT.

“Imagine the bureaucracy needed to oversee and collect VMT fees from millions of highway users,” said ATA’s Bob Pitcher. “Even when a system is in place to supervise collection of taxes, the VMT concept has proven vulnerable to evasion.

ATA believes the collection of federal fuel tax at the pump remains the most equitable method of funding highways because it is a user’s fee.

Oregon is hoping its experiment with a VMT-based funding system will lead to an expansion of the program.

“This is a much bigger scale and our last chance to see if this could work for potential expansion of the program down the road,” said Oregon DOT’s Godfrey. “We are hoping that people will sign up and that Oregonians will find this is an acceptable alternative to the gas tax.”

“This is one solution,” she continued. “And we think it’s the best.”