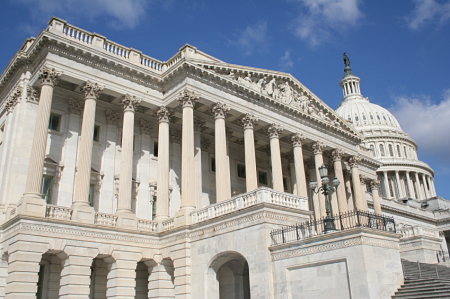 Earlier this month, the U.S. House of Representatives passed the Department of Transportation (DOT) and Department of Housing and Urban Development (HUD) bill, commonly referred to as THUD.

Lawmakers approved the $55.3 billion measure by a razor-thin margin, 216-210, after rejecting amendments from Democrats that would have increased funding for Amtrak and the D.C. Metro, as well as doing away with a provision restricting travel to Cuba.

The bill included two key provisions that affect the trucking industry: a requirement that the Federal Motor Carrier Safety Administration demonstrate the July 2013 hours-of-service restart restrictions truly improve the health and safety of professional drivers and a provision that would allow carriers to utilize twin 33-foot trailers.

The American Trucking Associations (ATA) was quick to praise the action.

“By including language requiring a more robust study of the hours-of-service restart restrictions originally imposed by the Federal Motor Carrier Safety Administration in July 2013, and a modest increase in the length of some truck combinations, the House has taken an important step in improving the safety of our highways, first and foremost, but also the efficiency of our highway system and the industry that moves nearly 70 percent of the nation’s goods,” said ATA President and CEO Bill Graves.

Graves called upon the Senate to quickly pass a bill that follows the House lead. The bill isn’t likely to make it out of the Senate without changes.

U.S. Rep. Mario Diaz-Balart (R-FL), chairman of the Transportation, Housing and Urban Development Subcommittee of the House Committee on Appropriations, sponsored the bill and said the provisions go a long way to further congressional infrastructure priorities.

“Many roads, bridges and tunnels across America are in dire need of restoration, and the legislation provides $40.3 billion toward their repair and renovation,” Diaz-Balart said.

Another $15.9 billion went to the Federal Aviation Administration to ensure full funding of air traffic control and its personnel. More than $3 billion would be invested in upgrading railroads with better safety measures.

“This modest change will reduce the number of truck trips needed to move the nation’s freight, cut emissions and reduce trucking’s exposure to crashes,” according to ATA.

“The House has shown tremendous leadership in passing this bill and putting forward these important provisions,” Graves said. “And we now call upon the Senate to quickly pass a bill that follows that lead. Despite the ongoing misinformation campaign by critics of businesses in general and trucking in particular, these two provisions will make our highways safer and ensure our country’s economy is served by an efficient supply chain.”

The bill would provide funding for the Highway Trust Fund, whose authorization expires again at the end of July.

Obama administration officials have blasted the bill’s funding for housing vouchers, which would get $1.2 billion less than the president requested.

That funding level, officials have said, would fail to restore nearly 70,000 vouchers lost from the 2013 sequester and would prevent the government from renewing 28,000 existing vouchers.

Freight advocates, including the American Association of Port Authorities and the National Customs Brokers and Forwarders Association of America, didn’t wait long after the bill’s passage to react.

“We believe continued funding related to a national freight strategy and the strengthening of freight competitive grant programs are at the heart of sustaining our competitiveness on the international stage, and strengthening of our nation’s domestic economy and rate of job growth,” the coalition of dozen business groups said.

Since it was launched in 2009, maritime projects have received $500 million in TIGER grant funding, allowing ports to leverage $700 million in private, state and local backing. Last round, seven ports received roughly $73 million in TIGER grants that helped support more than $327 million in upgrades, expansion and project planning, according to an analysis by the Coalition for America’s Gateways and Trade Corridors, a Washington, D.C.-based group representing freight interests.

Of the $4.6 billion in TIGER grants awarded, roughly $1.1 billion went to 66 freight projects, including rail and highway improvements, according to the letter.