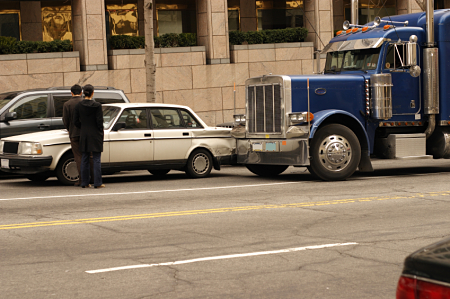 The National Transportation Safety Board (NTSB) is pushing the automotive and trucking industry to adopt life-saving collision avoidance technology sooner than later, according to a recent NTSB report.

“You don’t pay extra for your seatbelt,” said Chairman Christopher A. Hart. “And you shouldn’t have to pay extra for technology that can help prevent a collision altogether.”

But the Alliance of Automobile Manufacturers says collision avoidance systems should remain optional.

“There are almost two dozen driver assists on sale now, and some consumers may prefer a 360 degree camera view or parking assist,” said Gloria Bergquist, vice president of the Alliance. “Automakers see automatic braking as helpful to consumers, but consumers should decide what they want and need.”

NTSB has recommended adoption of collision-avoidance systems or other steps to encourage their use a dozen times over the past 20 years, but the report called progress “very limited.” Only four of 684 passenger vehicle models in 2014 included automatic braking systems as a standard feature: the Mercedes-Benz G Class 4X4, an SUV; the Subaru Forester and Outback, also SUVs, and the Subaru Legacy, a mid-sized sedan.

According to statistics from the National Highway Traffic Safety Administration (NHTSA), rear-end crashes kill about 1,700 people every year and injure half a million more. More than 80 percent of these deaths and injuries might have been mitigated had the vehicles been equipped with a collision avoidance system.

The NTSB has made 12 recommendations over 20 years in favor of forward collision avoidance technologies, including 10 recommendations resulting from an earlier special investigation report in 2001.

The progress on these recommendations, however, has been very limited. The report notes that a lack of incentives and limited public awareness has stunted the wide adoption of collision avoidance technology.

Only 4 out of 684 passenger vehicle models in 2014 included a complete forward collision avoidance system as a standard feature. When these systems are offered as options, they are often bundled with other non-safety features, making the overall package more expensive.

“The promise of a next generation of safety improvements has been used too often to justify inaction,” Hart said. “Because there will always be better technologies over the horizon, we must be careful to avoid letting perfection become the enemy of the good.”

Furthermore, the NTSB recommends that NHTSA develop tests and standards in order to rate the performance of each vehicle’s collision avoidance systems and to incorporate those results into an expanded NCAP 5-star safety rating scale.

The NTSB is also issuing a companion Safety Alert for consumers and commercial fleet owners that urges them to consider vehicles with collision warning and autonomous emergency braking functions.

A group of safety advocates – which includes the Truck Safety Coalition, the Center for Auto Safety, Advocates for Highway and Auto Safety, and Road Safe America – earlier this year filed a petition for rulemaking with NHTSA, calling for swift action on the issue.

The petitioners cited statistics showing that, from 2009 to 2012, fatalities related to truck crashes increased 16 percent and injuries increased 40 percent, resulting in about 104,000 injuries and nearly 4,000 fatalities in 2012.

Many of the crashes in question resulted from rear-end pileups, the group stated. These incidents could be reduced, the petitioners claim, if NHTSA established a safety regulation to require cameras on all trucks and buses with a gross vehicle weight rating of at least 10,000 pounds.

NHTSA continues to research camera systems as one safety feature for heavy vehicles.

“Research indicates that each year of delay is associated with needless loss of as many as 166 lives and injury to over 8,000 individuals,” the petitioners stated.