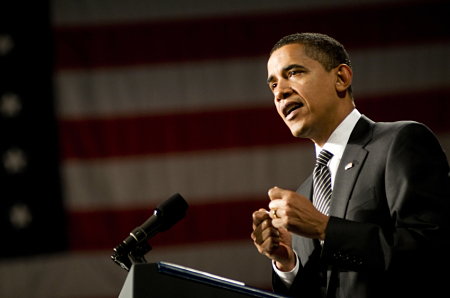 President Obama somewhat reluctantly signed a two-month extension to the highway bill last week, but he wasn’t happy about it.

“It is the president’s view that the era of short-term patches and chronic under-investment in our transportation infrastructure must come to an end,” said White House spokesman Josh Earnest.

Obama previously proposed a six-year, $478 billion transportation bill, but Congress has been unable to reach a long-term deal — only short-term fixes.

“This is the 33rd short- term fix for the Highway Transportation Trust Fund since 2008,” Earnest said. “The 33rd.”

The measure, dubbed the Highway and Transportation Funding Act of 2015, extends several aspects of infrastructure funding through the end of July.

Those include highway aid and transit programs under the Highway Trust Fund, as well as freeing up monies in the fund and allowing tax revenues to be deposited in the fund.

Members of both parties have acknowledged a tricky path forward to secure about $15 billion a year to fund a highway bill for as long as six years.

“Senate Democrats want to get on with a long-term solution, because we understand that you cannot have big league economic growth with little league infrastructure,” said Sen. Ron Wyden (D-Ore.), the top Democrat on the Finance Committee.

Sen. Pat Roberts (R-Kan.) said he would love to “give some people some legitimate expectations, predictability.”

“But I’m just not sure that we can get that done,” Roberts said.

House Transportation and Infrastructure Committee Chairman Bill Shuster said he would rather extend the program through at least the end of the year.

Still, he said that if Congress didn’t pass the two-month extension, more than 4,000 U.S. Department of Transportation personnel would be put on furlough and transportation projects across the U.S. would be at risk.

The Congressional Budget Office recently estimated that the Highway Trust Fund would spend about $10 billion during the two-month period.

Lawmakers disagree on how to pay for a longer extension, and many oppose raising the federal gasoline tax that provides most of the money for the trust fund.

The Administration said Congress needs to “end the era of short-term patches and chronic under-investment” in highways and mass transit.

“This continuing pattern of uncertainty has already caused several states to cancel or defer projects during the height of summer construction season,” the administration’s budget office said in a statement.

While the extension allows the Highway Trust Fund to keep spending money, it will not provide additional money because the fund is expected to remain solvent with existing resources during the two-month period.

Spending from the Highway Trust Fund has outpaced its tax revenue since 2001. Shortfalls have been made up by periodic transfers from the Treasury’s general fund. Those transfers totaled $54 billion from 2008 through 2014, according to the Congressional Budget Office.

Senators Barbara Boxer, D-Calif., and Tom Carper, D-Del. – the highest-ranking minority members on both the full EPW Committee and on its transportation subcommittee – introduced legislation to extend the authorization of surface transportation programs into July.

Then on May 15, two committee chairmen in the House, Bill Shuster, R-Pa. and Paul Ryan, R-Wis., introduced a measure to extend authority for the programs to July 31.

Shuster and Ryan said, “It was our preference to move an extension through the end of the year, but we will need more time to reach a bipartisan agreement on offsets. This legislation will allow transportation spending to continue through July, while we work towards a next step to close the trust fund’s shortfall.”

They said dealing with that shortfall “will require our colleagues on both sides of the aisle to be constructive in working towards a solution. Only then will we be able to produce a plan that gives states the certainty they need to build the roads, bridges, and other infrastructure our communities and economy need to thrive.”

House Majority Leader Kevin McCarthy, a Republican, said the two-month extension “is not the ideal solution.” He blamed Democrats for failing to agree on spending cuts to fund a longer transportation bill.

“Because of that, we were only able to pass a two-month patch and may be forced to yet another short-term patch in the future,” McCarthy said.

State transportation officials and many lawmakers contend that a series of short-term funding patches may keep existing work going, but they do not provide enough long-term funding certainty to launch major new projects.

That may cloud the demand outlook for major construction materials, equipment and engineering suppliers and the transportation industry in general.