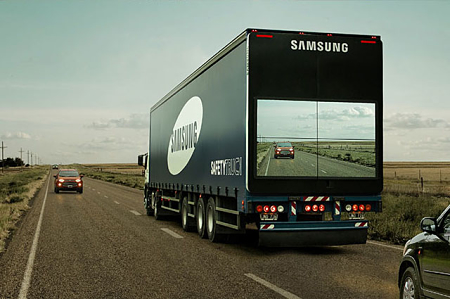 Samsung, a company best known for its consumer electronics, has taken its big screen technology to the road with the Samsung Safety Truck, which features a giant screen mounted on the back of a semi-trailer that gives following traffic a view from the front of the truck.

The Samsung Safety Truck features a wireless front camera and four outdoor rear monitors to project the traffic conditions for both the truck driver and trailing drivers. This way, the truck driver can see what is ahead, and drivers behind can see what’s beside or ahead of the driver so as to plan quick decisions.

Samsung has been testing the Safety Truck with a local B2B client in Argentina, and notes that the test vehicle is no longer operational. Argentina was the ideal place to test the company’s new safety vehicle, seeing that, according to Samsung’s own promo video, nearly one person per hour dies in a traffic accidents in that country.

Samsung is exploring whether to bring the technology to the U.S. market in light of recent advances and testing of autonomous vehicles in the U.S. and the May unveiling of Daimler’s autonomous truck, now being tested on Nevada highways.

Samsung is not the first company to introduce such “see-through” technology for vehicles. Keio University in Japan developed a technology for the Toyota Prius that makes the car’s interiors appear transparent using cameras mounted on the back and sides of the car and projecting the images onto the interiors.

The technology allows Prius drivers to see things outside the car that they normally couldn’t see.

Jaguar’s 360 Virtual Urban Windscreen, still in the conceptual stage, eliminates blind spots by rendering the pillars on the sides of the car’s windshield or door frames transparent — again with the help of cameras mounted on the outside of the vehicle.

Samsung believes the technology could reduce head-on collisions caused when vehicles attempt to pass trucks on two-lane highways by providing better views of traffic ahead. There are more than 3,600 truck deaths annually in the U.S.

Daimler’s autonomous truck also uses cameras to keep the truck within its lanes when in self-driving mode.

Daimler says its autonomous trucks drive much more efficiently than their human-driven counterparts.

Daimler’s Freightliner Inspiration Truck is the first to be tested on public roads anywhere in the world and comes on the heels of several years of automobile testing by several companies.

The trucks have a highway pilot system similar to an airplane’s autopilot – the system itself detects when it is safe to take over and the driver flicks a switch and relinquishes control to the machine.

The system stays in one lane at a steady speed, uses the road markings to steer around curves and automatically adjusts speed to traffic if it senses a vehicle in front. It won’t leave the lane, though, so the driver will need to do any overtaking required and also take the controls in bad weather. The army of sensors mounted on the truck includes front radar that can see more than 800 feet down the road to detect any potential obstacles.

As with an airliner, the driver still monitors the system, but he can relax, read a book, watch a game or catch up on some paperwork while sitting in the driver’s seat.

“It is incorrect to refer to a ve¬hicle in autonomous mode as a driverless truck,” Daimler said in a statement. “Drivers remain the boss in their vehicle because the technology requires the presence of a qualified truck driver with valid commercial driver’s license in the cab and on the gauges.”

The system is designed to operate at maximum fuel efficiency and is estimated to cut fuel consumption by five percent.

Samsung said it has proven the technology will work. Now the company has to explore the legal avenues it must follow to put the technology on the market.

Daimler also acknowledged that it could be at least 10 years before self-driving 18-wheelers are ready for the road, although the delay could have more to do with policy issues rather than technology lag.