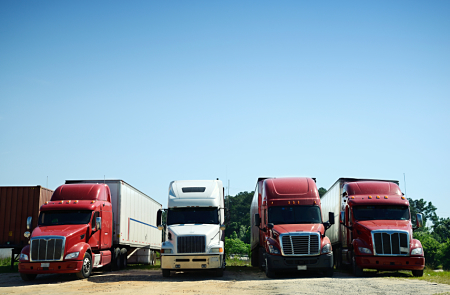 More than a dozen Georgia-based truckers recently testified before the Georgia Legislature, telling state lawmakers that shipping companies have been incorrectly classifying them as independent contractors rather than employees.

In Georgia, 82 percent of truckers hauling freight from ports are misclassified, according to the National Employment Labor Project.

Deputy Project Director Rebecca Smith said the misclassification costs the average driver $6,000 per year in wages alone. A study by the National Employment Labor Project estimates that nearly one in every three workers nationally is improperly classified and compensated. That resulted in $2.7 billion in taxes going paid in 2006, the most recent year available.

As contractors, the owner-operators have to cover their own expenses, and most drivers can’t afford to buy health insurance.

More than a dozen truckers took a turn at the microphone sharing their complaints with senators during a hearing of the Senate Insurance and Labor Committee, assigned to study worker classification. Other testimony came from legal experts, trade groups and a labor union.

Some talked of attempts 25 years ago to address the same issue that resulted in their being cited for violating federal laws against collusion. A couple called for a strike that would cripple port operations, and one even warned that frustrations could boil over to the point of violence.

A lawyer from the Georgia Department of Labor said worker classification is a routine part of audits by the 50 or so investigators at the agency, but Sen. Lester Jackson, D-Savannah, suggested that was too few auditors in a state with 220,000 employers.

A trade association executive said the system works well for most of the industry.

“Some of what you’ve heard today is true. Some of it is inaccurate,” said Ed Crowell, president of the Georgia Motor Trucking Association.

Some witnesses talked about misclassification in other industries. The head of the South Georgia Mechanical & Erectors Association said widespread misclassification makes it harder for conscientious companies to compete with those who save money by cheating workers, and a representative of a local Plumbers & Pipefitters Union said his review of files show 100 percent of contractors on federal projects in the state misclassify workers.

Committee Chairman Josh McKoon, R-Columbus, announced that two more hearings will be scheduled and that no decision has been made about whether to propose legislation. But he said, “I heard some things that, frankly, were pretty disturbing.”

The committee approved Senate Resolution 11 by Sen. Lester Jackson, D-Savannah, which creates a panel to study worker classification and recommend legislation next year.

The issue of driver classification has erupted in several states. In California, truck drivers at Pacific 9 Transportation recently walked off their jobs at the ports of Los Angeles and Long Beach, claiming the company misclassified them as independent contractors, depriving them of benefits and higher pay.

The walkout is the latest response from truckers in a labor dispute that has lasted nearly two years. Drivers for Pacific 9 and other short-haul companies have gone on strike several times since 2013, most recently in late April, alleging misclassification and retaliation for speaking out about labor conditions. The striking truckers are backed by the International Brotherhood of Teamsters union, which is seeking contractswith the companies — something that’s possible only if drivers are classified as employees.

Last month, FedEx agreed to pay$228 million to settle a class-action suit brought by truck drivers who said their classification as independent contractors was wrong because they were required to work 10 hours a day, wore company uniforms and drove trucks that carried the company’s logo.