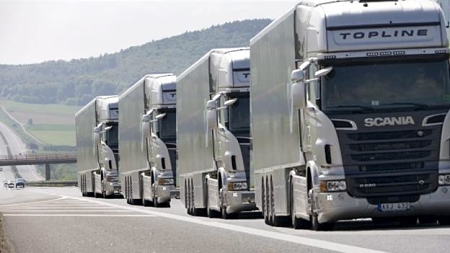 As part of the Federal Highway Administration’s advanced research project on heavy truck cooperative cruise control, the first phase of the study looked at the commercial feasibility of driver assistive truck platooning, or DATP.

Funded by DOT’s Exploratory Advanced Research program, the platooning study is looking at radar, vehicle-to-vehicle communications and video technology to decrease over-the-road truck headways to achieve better fuel economy without compromising safety, according to the researchers.

The American Transportation Research Institute (ATRI), a core team member, was involved in multiple tasks, including the development and assessment of trucking industry user requirements.

Some of the Phase One results include the following:

In Phase 2 of the DATP project, the research team will be conducting both test-track and on-road pilot testing of the system. In addition, the team will monitor and assess a variety of human factors considerations including driver satisfaction, driver training requirements and driver operational experiences. The business case analysis will be extended based on these results.

Peloton, one of the industry leaders in platooning technology, recently announced an investment by Nokia Growth Partners (NGP), an independent fund sponsored soley by Nokia.

NGP joins seven other Fortune Global 500 transportation and technology leaders investing in Peloton. The investment will accelerate Peloton’s development and deployment of truck platooning technology into the U.S. and international trucking industries. The NGP investment follows a $17 million oversubscribed Series A investment round co-led by DENSO International America and Intel Capital.

The Peloton Truck Platooning System is a vehicle automation technology that has the potential to save lives and save fuel in today’s trucking operations. The system electronically couples pairs of trucks through a combination of vehicle-to-vehicle communications, radar-based active braking systems and proprietary vehicle-control algorithms. The direct communication link between the two trucks enables the rear truck to automatically react to acceleration or braking by the front truck nearly instantaneously. This automatic and immediate reaction improves safety and allows trucks to travel at closer distances, which improves aerodynamics and reduces fuel use on both vehicles. Peloton’s Cloud-based Network Operations Center continuously monitors individual truck safety and approves the linking of pairs of trucks only on suitable roads under appropriate weather, vehicle and traffic conditions. Drivers retain steering control and command of their vehicles at all times. The Peloton System integrates best-in-class active safety systems with cloud-based monitoring, making individual trucks safer at all times and delivering a rapid ROI to fleets via fuel efficiency.

In 2013, Peloton began demonstrating its Truck Platooning System with fleets and other transportation stakeholders in the U.S., where the trucking industry is worth $700 billion annually. The system is proven to reduce fuel consumption by 10 percent for the rear truck and 4.5 percent for the front truck, based on industry-standard SAE J1321 Type II fuel economy testing conducted by the North American Council for Freight Efficiency and a major Utah-based trucking fleet.

To date, the Peloton System has logged more than 14,000 platooning miles and been showcased in on-highway demonstrations, government, private and fleet tests in Nevada, Utah, Texas, Ohio, Florida and Michigan. Additional demonstrations and fleet trials are planned for later this year and 2016.