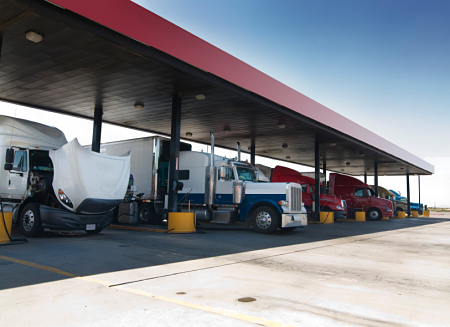 At the end of August, diesel fuel prices dropped for the 14th consecutive week, reaching 2009 levels.

ATA estimates the industry will spend $105 billion for fuel in 2015, compared to $147 billion in 2014. ATA is basing its forecast on information from the Department of Energy’s Energy Information Administration (EIA).

Sean Hill, an EIA economist, said retail diesel prices could fall another 25-30 cents per gallon by year’s end due to excess inventory and the potential of Iranian oil hitting world markets.

The lower fuel costs in trucking will have an impact on American consumers.

Jack Gillis with the Consumer Federation of America said the results of two national surveys demonstrate that consumers understand that the cost of fuel in trucking is passed on to them and that they would like to see standards requiring increased fuel efficiency.

“From a household energy expense perspective, the amount consumers pay for truck fuel is almost as much as they spend for home electricity and about half of what a typical household pays for gasoline.”

Two Consumer Federation of America surveys (July 2014 and July 2015), found that the vast majority of consumers (over 90%) understand that “some, most, or all” of the fuel costs of heavy-duty trucks, which transport virtually every consumer good, are passed on to consumers. In fact, over 55 % believe that “all or most” of these costs are passed on to the consumer.

The drop in fuels costs is having a ripple effect in the overall economy.

“We continue to work hard to provide the best possible price for our customers,” said Alex Glenn, Duke Energy Florida president. “Our successful cost management and careful planning is helping lower customer rates while we invest in affordable, clean energy and improve reliability for our customers every day. If approved as planned, our customers will be paying nearly 15 percent less for electricity than they were six years ago.”

The dropping fuel prices are also starting to have an effect on airline fares, which often seem immune to changes in fuel costs.

Airline fares recorded their steepest monthly decline in 20 years, falling 5.6 percent in July, according to the Bureau of Labor Statistics.

“The one thing I’m surprised about is how quickly it happened,” said Seth Kaplan, managing partner of Airline Weekly. “And as you look at future capacity it’s growing even faster, so prices will likely fall even further.”
Kaplan said there is a lag time associated with how major airlines factor in lower fuel prices.

“When fuel prices fall passengers always ask why that savings isn’t passed along to them,” Kaplan said. “But airlines don’t start planning to add capacity until six, nine, 12 months out.”

And with oil continuing to trade around six-year lows, bigger airlines might feel more comfortable competing with budget competitors like Spirit, according to BestFares CEO Tom Parsons.

“I haven’t seen airlines play this kind of game in a long, long time,” he said, adding that the airfares he is seeing are the lowest in years.

“Smaller regional airports might not be seeing the same price declines, but Emirates is offering round-trip flights from New York to Milan for $3 cheaper than what most cities charge for a fuel surcharge.”