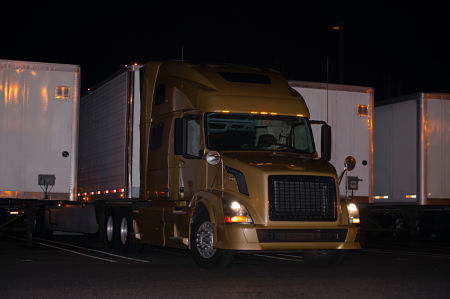 The boroughs of New York City and the streets of Pensacola, Florida wills serve as field test sites for off-peak deliveries and pickups as part of a U.S. DOT pilot program.

USDOT’s Federal Highway Administration (FHWA) announced $200,000 in grants under its Surface Transportation Research, Development and Deployment Program in order to allow cities with congestion problems to explore shifting many freight delivery and pickups to nighttime and off-peak hours. The grants will fund pilot project in New York City (NYC) boroughs and in Pensacola, Fla., to work with large retailers and food companies to research and test the off-hour delivery of goods.

“I’ve talked to people around the country and they have told me they are tired of spending hours stuck in traffic – they want their transportation problems solved,” said U.S. Transportation Secretary Anthony Foxx. “If successful in these cities, this approach can be applied to other areas around the country, cutting congestion, commute times, and the costs to businesses.”

The pilots will look at how truck deliveries made outside of peak and rush hours – when there is less traffic on the highways – can save time and money for freight carriers, improve air quality and create more sustainable and livable cities. The funding will be used to help businesses retool their operations to accommodate shipments during off hours and distributors reconfigure routes and supply chains by using low-cost operational strategies.

“The problem of daytime truck traffic is well-known to any major city in the United States, and it’s time for new solutions,” Federal Highway Administrator Gregory Nadeau said. “While aggravating local traffic, trucks too have been forced to crawl through city streets – causing businesses loses in time, money and productivity.”

The Rensselaer Polytechnic Institute, based in Troy, N.Y., will receive a $100,000 grant from FHWA to engage large nationwide and regional retailers and food companies, already operating in NYC, to explore this approach in other NYC boroughs and Long Island, and eventually nationwide. This project builds on an earlier pilot project in NYC that was also funded through a similar USDOT grant.

The Florida Department of Transportation (FDOT) will also receive a $100,000 grant to partner with the Sacred Heart Health System to explore off-hour freight deliveries at its medical campus, in Pensacola, Fla., which includes the expanding children’s hospital and adult care center. The grant will help the hospital and FDOT investigate the cost-benefit of off-hour deliveries, including materials for campus operations and hospital supplies, in light of the additional traffic expected from the growing facility.

“We were very pleased when the FDOT approached us about participating in this research study,” said Mike Burke, hospital spokesman. “The intersection of Ninth Avenue and Bayou Boulevard/Brent Lane is one of the busiest in Pensacola, and it is likely to become even busier in the future.”

In June of 2014, Sacred Heart completed Bayou Tower, which added five floors of patient care units with 112 private rooms. The hospital plans to begin construction in early 2016 on a five-story Children’s Hospital and expansion to women’s services.

“As we grow to serve the needs of Northwest Florida, we look for opportunities to decrease congestion both on our campus and in the surrounding community,” Burke said.

The Sacred Heart grant is awarded under the USDOT’s Surface Transportation Research, Development and Deployment Program.

“This project award is exciting because it’s so important to maximize the efficiency of the roadways we have before constructing new infrastructure,” said Mary Robinson, director of transportation planning at West Florida Regional Planning Council.

According to USDOT’s “Beyond Traffic” study earlier this year, the amount of freight moving in the United States will grow by 45 percent by 2040. Secretary Foxx emphasized the Administration’s plan to address the infrastructure deficit with the GROW AMERICA Act, a six-year surface transportation reauthorization proposal that would provide $18 billion over six years for targeted investments in freight.

If successful, a similar approach could be adopted in other markets around the country, saving time and money –hundreds of millions of dollars– for businesses and truck drivers.  Moreover, it can become part of the solution to the larger congestion problem, bringing relief to people tired of spending hours stuck in traffic every day.

The pilot programs will gather data on outcomes such as how much time and money truck deliveries made outside of peak and rush hours can save; how they improve air quality; and how they help create more livable cities.