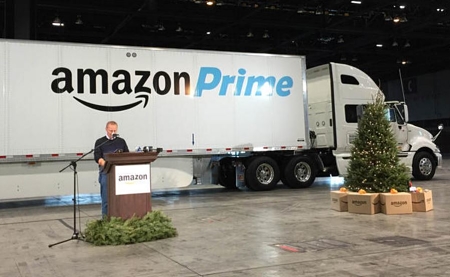 Just in time of the recent holiday season, Amazon ventured into the trucking industry, unwrapping thousands of new trailers to help speed up US deliveries and give customers a bigger window to place orders for same day or two-day delivery.

Amazon rolled out the new trailers in early December. The company is using third party trucking companies to supply trucks and drivers.

Experts predict the investment into truck trailers will give the company more control of its shipping network.

The company invested in the new trailers to help it keep pace with its ever growing order volumes, according to an Amazon spokeswoman. The new trailers are being used to shuttle goods between Amazon’s warehouses, as well as move items to delivery stations and sorting facilities along the way to arriving at their final destinations.

Amazon says the company will continue to use the US Postal Service, United Parcel Service and FedEx, as well as midsize and regional carriers, to help it ship goods.

Amazon continues to build out its own shipping network so it can have more flexibility in making deliveries and keep speeding up shipments. That network may one day rival those of UPS and FedEx, but for now Amazon continues to rely heavily on outside companies to help it deliver its millions of packages.

“We have a very good and longstanding commercial relationship with many carriers, but we know that there is supplemental capacity needed in the market — so we are supplementing our existing carriers with our own trailer equipment,” said Mike Roth, Amazon’s VP of North America Operations.

In addition to the new trailers, Amazon already uses its own branded trucks for shipments with its AmazonFresh grocery deliveries and Prime Now rapid-deliveries service in some US cities.

The new trailers were unveiled at an early December event in Chicago, where Amazon employees packed 2,000 care packages into one of them. Those packages were shipped to US troops abroad who weren’t able to come home for the holidays.

“I couldn’t be more pleased that our very first Amazon trailer headed out on the road carrying such special packages,” said Roth. “I think it is a tradition of us innovating for our customers. We pride ourselves on what we’ve built in the transportation and supply chain and fulfillment center network, and this is just another example of where we see that there is innovation to be had in an existing industry.”

Sales to Amazon’s Prime subscription members, who pay $99 per year, are making inroads into traditional retailers like Walmart and Target.

According to the Wall Street firm Cowen & Company, Amazon Prime is drawing younger and wealthier shoppers who use the website for an increasingly diverse range of products.

According to Cowen’s survey of 2,500 customers, Amazon Prime shoppers have an average household income of $69,300, well above the income of Amazon shoppers in general and 24.8 percent higher than Walmart shoppers.

“Unlike ten years ago, we live in a world in which you can shop anywhere at any time. It’s no longer about one day, but a season of digital deals, and savvy online shoppers are ready to see what exclusive promotions retailers have in store before they checkout,” said NRF President and CEO Matthew Shay.

“Consumers watch for deals starting in the days before Thanksgiving and they save a bit of their budget to shop the deep discounts offered by their favorite retailers on Cyber Monday,” said Prosper’s Principal Analyst Pam Goodfellow. “With so many consumers relying on their smartphone for everything from travel to email, the convenience of enhanced mobile shopping appeals to consumers and has changed who and where people shop.”