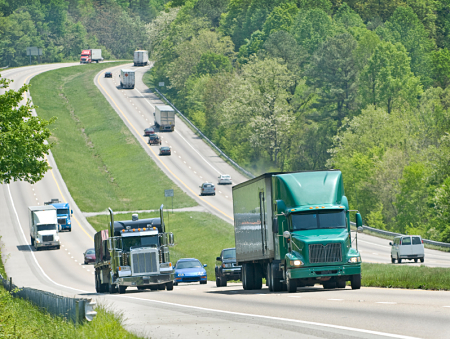 The American Transportation Research Institute (ATRI) recently released the latest findings of its annual truck bottleneck analysis and the Tom Moreland Interchange at the intersection of I-285 and I-85 in Atlanta topped the list.

The 2015 Congestion Impact Analysis of Freight-Significant Highway Locations, which assesses the level of truck-oriented congestion at 250 locations on the national highway system, uses several customized software applications and analysis methods, along with terabytes of data from trucking operations to produce a congestion impact ranking for each location.

The data is associated with the FHWA-sponsored Freight Performance Measures (FPM) initiative.

Known by local commuters as “Spaghetti Junction,” the Tom Moreland Interchange in Atlanta it is not only the confluence of two highly traveled interstates, but is a five-level stack interchange featuring ramps to four secondary roadways.

Though not at the top of the list, Houston, Texas had four of the top 10 truck chokepoints listed.

The top 10 locations on the ATRI list this year are:

“With a robust economy comes increased demand for consumer goods, the lion’s share of which is carried by truck. We see that reflected in the ATRI truck bottleneck list as more trucks move through the nation’s major metropolitan areas to deliver the goods,” said Ed Crowell, Georgia Motor Trucking Association President and CEO. “ATRI’s ranking allows states to better understand where targeted infrastructure improvements could keep the economy moving.”

Since 2002, the American Transportation Research Institute (ATRI) has collected and processed truck GPS data in support of the Freight Performance Measures (FPM) initiative, a program that maintains and monitors a series of performance measures related to the nation’s truck-based freight transportation system. The measures resulting from this ongoing analysis quantify the impact of traffic congestion on truck-borne freight at 250 specific locations.

The information provided through the analysis can empower decision-making in both the private and public sectors by allowing stakeholders to better understand the severity of congestion and mobility constraints on the U.S. highway transportation system.

This is of particular importance as the nation weighs the needs and resources available for transportation funding. On a state and local level, this research can inform local investment decisions that can directly improve supply chain efficiency.

The “bottleneck” analysis incorporates and synthesizes several unique components, including a massive database of truck GPS data at freight-significant locations throughout the United States (U.S.), and an algorithm that quantifies the impact of congestion on truck-based freight. Since its inception, the monitored list has grown to 250 freight-significant locations. In addition, the annual reports provide a chronological repository of mobility profiles, whereby congestion changes can be assessed over time.

This, in turn, allows transportation analysts and planners to conduct performance benchmarking and identification of influential factors contributing to congestion and the requisite consequences on truck-freight mobility.

Other locations in the top 25 included the following:

“As we have additional motorists on the roadway, the unfortunate link between increase in congestion and increase in miles traveled is likely to have an increase in the number of accidents and stalls as well,” said Raquelle Lewis, spokeswoman for the Texas Department of Transportation in Houston.